My mother in-law advised my wife to leave me, harassed me with Civil Defense Corps —Man

•He slept with his mistress in our home, slapped me for challenging him —Woman 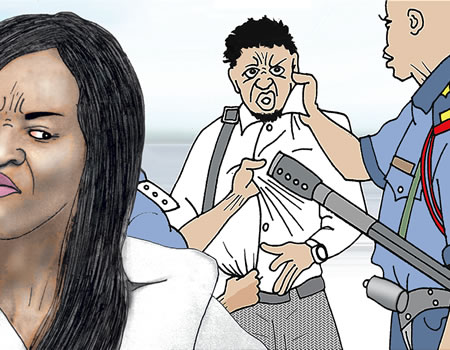 A man, Ibrahim Kareem, has prayed Oja Oba/Mapo Court C Customary, Mapo, Ibadan, Oyo State, to dissolve the three-year-old marriage between him and his wife, Tolulope.

Ibrahim alleged that his wife is promiscuous and that she can hamper his health by infecting him with STDs.

The plaintiff added that her mother rather than discourage her daughter from living an indecent lifestyle, aided and condoned her.

He added that her mother-in-law encouraged his wife to walk out on him and abandon their marriage.

Ibrahim further told the court that his wife and mother-in-law also planned to harm him.

Tolulope acceded to divorce, stating that her husband hands were also not clean.

The defendant explained that the plaintiff brought his mistresses to their matrimonial home and any time she complained, he would beat her mercilessly.

Tolulope told the court she no longer loves her husband and that she was no longer interested in their marriage and therefore prayed the court to hear her husband’s prayer.

But she pleaded with the court to grant her custody of their only child so as to give her adequate care.

Ibrahim, giving his evidence said: “The greatest mistake I made was that of not properly studying my wife very well before going along to marry her.

“Tolulope no doubt is from a family that places no value on marriage and has no regard for a pious lifestyle.

“Immediately I got married to my wife, I started to notice that her ways were not straight. Tolulope would leave home early and return late. She was also fond of receiving phone calls late in the night.

“I always felt uncomfortable with these habits and didn’t hide my feelings from her. But rather than listen to me she would get angry and turn the issue into a quarrel.

“I later got to know that she returned home late because she was always hanging out with different men.

“My lord, I was scared of being infected with STDs and decided to report her to her mother when all efforts to make her change from her promiscuous lifestyle proved abortive.

“To my surprise, my mother in-law rather than rebuke her daughter, kept defending her.

“Tolulope’s mother is a bad influence on her. She consistently counseled my wife wrongly and turned her against me.

“Tolulope later moved out of my home and I learnt she did this with the aid of her mother.

“My lord, not yet satisfied, my mother in-law led officers from the Nigeria Security and Civil Defence Corps (NSCDC) to harass me,” Ibrahim told the court.

Responding, Tolulope, said: “My lord, I pray that you hear my husband’s prayer of divorce. I no longer love him neither am I interested in our marriage any more. I want to start my life afresh.

“Ibrahim has no regard for me. He humiliated me by bringing his mistresses to our matrimonial home.

“Every complaint I made earned me slaps and beatings from him. He would beat me to a pulp and almost damaged my eardrum as a result of the frequent slaps he gave me.

“My lord, he descended on me with punches and almost killed when I caught him in our room with one of his lovers.

“I moved out of his house after this because he almost maimed me.

“The decision to leave him was mine not my mother’s.

“My lord, I pray this honourable court to grant my husband’s request for divorce but grant me custody of our only child so that I can give her adequate care.

She, however, informed the court that Ibrahim and his relatives are ingrates. According to her,  she treated him like her younger brother and would not have done anything to harm him.

Odunade consequently dissolved their union and awarded custody of their only child to Tolulope.

He ordered Kareem to pay N5,000 monthly as their baby’s feeding allowance.