•I’m no longer interested in our marriage, I’m in love with another man —Wife 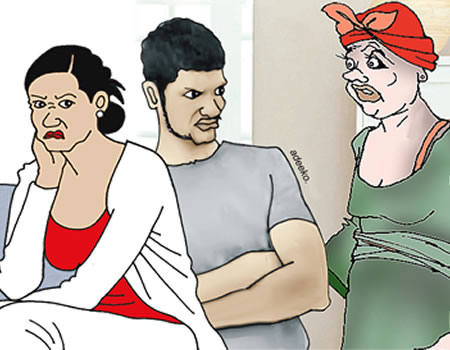 Taofeek  alleged that Adebisi  forcefully took their only child from him and had failed to give  her the  necessary care needed. According to him, she has failed in her duties to her as mother. The plaintiff added that their child is lagging behind in her education.

The plaintiff told the court he could no longer stomach his wife and her grandmother’s atrocities and therefore pleaded with the court to separate them.

Adebisi consented to divorce, stating that she was no longer interested in their marriage and that she was in love with another man.

The court president, Chief Ademola Odunade, giving his judgment ruled that their marriage was dissolved and granted custody of their child to the defendant.

Odunade ordered the plaintiff to pay the sum of N5,000 monthly for their child’s upkeep.

He also mandated him to be responsible for her education and health care.

Taofeek said: “My lord, my wife and her grandmother have given me enough problem and I want both of them out of my life.

“My wife was under her care when I impregnated her and I presented myself to her as the one responsible for her granddaughter’s pregnancy, displaying my readiness to marry her.

“She agreed to my proposal but insisted Adebisi must be with her and under her care till she put to bed and then she could move to my house.

“I agreed to her plan since she is elderly. I gradually realised she was domineering in nature.

“She started dictating the tune and refused that I had a say in issues pertaining to my wife and the pregnancy.

“She insisted on choosing the hospital I registered my wife for ante-natal care and refused that I had a say in some decisions which she took with regards to her health.

“My lord, after my wife put to bed and was to move to my house, her grandmother insisted she was coming with her. I was against this and bluntly told her so because my apartment couldn’t accommodate an extra person since my first wife and children are living with me.

“My lord, my wife’s grandmother refused to understand the situation on ground or reason with me.

“She was resolute in her decision despite explaining to her that my first wife would help take care of Adebisi and the baby.

“I agreed that she moved in with us when it was obvious she was not changing her mind but she almost succeeded in tearing my home apart at the end of the day.

“Adebisi’s grandmother refused that my wife touch the baby. She refused that she bathe her or change her clothes.

“She ensured she poisoned Adebisi’s heart towards my wife and entire family. Adebisi suddenly changed in her behaviour and became touchy, always responding to issues irrationally.

“She again started acting rudely towards my first wife which wasn’t pleasing to me. The more I made her see reason the more stubborn she became all because her grandmother was ill advising her.

“My wife and her grandmother refused to eat the food prepared by my first wife and preferred to cook theirs. Her grandmother divided my home into two.

“She and her grandmother eventually left my house but I refused they went with my child.

“Our child was under my custody for some years until Adebisi  requested that she spent her holiday with her. I agreed but she refused that she returned to me.

“Adebisi failed to care for our child. I insisted she enrolled her in school before she did but she failed to monitor her studies. Our child is dull academically and lagging behind because she’s always repeating classes.

“My lord, I also learnt Adebisi has moved in with another man.

“My lord, I pray this honorable court to end the relationship between me and my wife and grant me custody of our child.

“I also plead with the court to warn her grandmother to desist from interfering in our affair, “the plaintiff said.

“My lord, I agree to divorce because I no longer love Taofeek.

“He refused to give me the necessary attention when I was with him because he was always dancing to his first wife’s tune. This spurred my walking out of our marriage but without our child because he strongly refused that I go with her.

“My lord, people kept calling me on the telephone and giving me details of how our child was neglected by Taofeek and his wife.

“Knowing fully well it would be difficult having custody of our child, I, therefore, came up with the plan requesting  that she spent her holiday with me.

“My lord, when I saw our daughter, I almost couldn’t recognise her because she was looking like a scarecrow. This prompted my decision not to return her to her father after the holiday was over.

“My lord, it is true I’m married to another man and he’s happy having our daughter live with him,” she concluded.

My mother in-law advised my wife to leave me, harassed me with Civil Defense Corps —Man