My marriage to my husband, who I met on social media, lasted only 2 months —Woman

•I sold my mother’s land to feed her —Husband 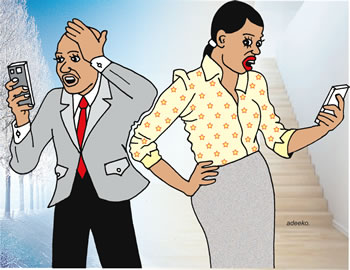 Funmilayo, who dragged her husband to court, complained of irresponsibility, deceit, lack of care and battery by her husband.

Funmilayo explained that she met her husband via the social media and that he presented himself as a responsible gentleman who was gainfully employed.

According to the plaintiff, their marriage lasted for only two months because she realised after they got married that her husband was jobless.

Funmilayo stated that while she left for work in the morning, her husband would stay back at home doing nothing.

She added that she started playing the role of breadwinner from the outset of their marriage.

The plaintiff also claimed that the defendant was tied to her mother’s wrapper.

Funmilayo explained that rather than appreciate her efforts, her husband took to beating her.

The plaintiff told the court she was tired of playing the dual role of breadwinner and helpmeet and that she loved her husband no more.

She, therefore, pleaded with the court to stop their union and grant her custody of the only child produced by their union.

Adekunle gave his consent to divorce.

He likewise told the court he was no longer in love with his wife because she was harsh towards him and that she never ceased to embarrass him.

Funmilayo said: “My lord, my marriage to Adekunle lasted for only two months because he laid the foundation of our relationship on deceit.

“Adekunle and I met on the social media and he presented himself as a responsible gentleman who was gainfully employed.  But I realised shortly after we got married that I was in a big mess because my husband never had a job.

“My lord, while I left home for work, my husband would stay back at home doing nothing.

“I took up the responsibility of feeding the home from the outset our marriage so as to cover my husband’s inadequacies and save myself from shame.

“My lord, I’m not only married to a jobless fellow but a brute. Any time I dared to complain about his lackadaisical attitude, he would beat me to a pulp.

“Adekunle never cared about my feeling. He displayed no intimacy towards me.

“The only person my husband cared for was his mother. He’s tied to his mother’s apron strings. Adekunle can’t do anything without his mother’s knowledge or consent. She has all his attention.

“The more I tried to make him see reason the worse he became.

“I got frustrated one day and decided to leave his house. I left with the pregnancy of our child.

“My lord, I want the best out of life. It is obvious I can’t achieve this staying married to my husband which was my reason for coming to court.

“I appeal to the court to separate us and please put our only child in my care.

“I further beg the court to make him responsible for our child’s welfare and meet all his needs, “she pleaded.

Adekunle, giving his testimony, stated: “My lord, Funmilayo is free to go. She has no respect for me as the head of the home. She was fond of addressing me rudely, thus insulting me. Funmilayo continuously embarrassed me in the presence of our neighbours.

“Any time I tried to call her to order, she would get angry and start shouting on top of her voice.

“My lord, contrary to what she said, I’m a responsible man. I did all I could to make her happy but she was just not contended.

“It’s true I’m close to my mother. She’s the one bearing the brunt of my needs. Shortly before Funmilayo moved out my house, my mother gave me her piece of land to sell and use the proceeds from it to run my home,” the defendant explained.

Giving his judgment after listening to both parties, the court president, Chief Ademola Odunade, pronounced their union dissolved.

He granted custody of their only child to the plaintiff and ordered that the defendant give the plaintiff N5,000 every month for their child’s feeding.

This he stated must be carried out through the court.

Odunade further asked the defendant to be in charge of their child’s education and health care among other things.

If we blame the government for all things, what about what we do?