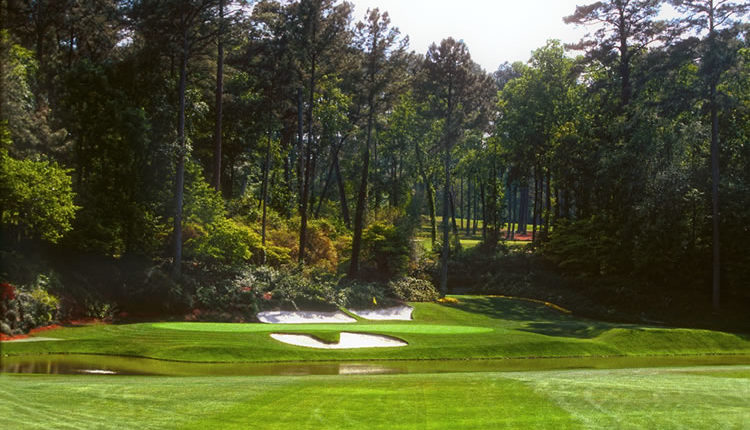 The turmoil of the coronavirus pandemic brought the golf schedule to a halt earlier this year, and, as a result, many tournaments were postponed or cancelled – the Masters being one of them. Annually held at Augusta National in April, the 2020 Masters will now take place in just two weeks’ time (November 12th), and, according to our golf tipster, US Open winner Bryson DeChambeau is set to land back-to-back majors.

As DeChambeau, and many other pros, make their way to Augusta, Georgia, in the hope that they will be fitted into the famous Green Jacket come November 15th, let’s take a look at five of the toughest holes that stand in their way. Read on to find out more.

Camellia is historically regarded as the hardest hole on Augusta National. The pros need to hook their tee shots around the tight dogleg. However,too far right could leave the pro with a lengthy shot into the green, whilst too much to the left, and they could find themselves in the trees.Although, with great risk comes great reward, as, if their drive is perfect, they could be gifted further yardage, due to the fairway running downhill. Rory McIlroy, who is the second favourite to win the Masters in the golf odds, famously triple-bogeyed this hole as he blew his lead on the final day of the tournament in 2011.

Yep, that’s right, once you’ve putted on the hardest hole on the course, you head for the tee box of the second toughest – and, to make matters worse, White Dogwood is the start of the dreaded Amen Corner. The pros are required to fade their tee shot to reach the fairway on the lengthy par 4. Their shot into the green is made even more difficult by a left-hand-side pond. The water makes it very difficult to birdie the hole, as the pro won’t want to risk losing their ball in the hazard. Instead, they hit their shot down the right, potentially leaving themselves needing to get up-and-down for par.

Once named Palm, the 240-yard par 3 was made harder in 2006 when the tee box was moved back 30/35 yards. The pros are required to take a long iron for their opening shot into the oddly shaped green, which is made even tougher by the two bunkers protecting it. In the 2016 Masters, the hole was only birdied 13 times, with none of those coming in the final two rounds!

At 155 yards, the 12th hole may be the shortest on the prestigious course, but it’s considered to be one of the toughest. Golden Bell is exceptionally difficult due to strong winds, Raes Creek, which protects the front of the green, and an array of three bunkers, which are strategically plotted around the tight green. On the final day, the pin is usually on the right of the green, making it an even more testing hole for the pros.

Tucked away at the back of the course, Magnoli is often overlooked by the Masters golf-goers. However, the fifth hole is actually one of the toughest on the course. The deep fairway bunkers, which were extended by a huge 80 yards in 2003, and the tee box being moved back 40 yards, in 2018, mean that the pros need to drive about 315 yards around the dogleg to avoid the large sand hazards. Once on the green, large humps make it an extremely difficult putting surface.

#EndSARS: Fresh Crisis Looms As Youths Threaten To Commence Fresh Protests In Lagos, Abuja Tomorrow
Nigerian youths appear to be bracing up for a showdown with the Federal Government as they have vowed to return to the streets for what they described as the second wave of the #EndSARS protest, warning that no amount of intimidation from the government or security agencies would stop their demonstration…

Buhari’s Painful Hobson’s Choice Of An Open Society
Social media is a bitch. A huge bitch for that matter. If you put yourself in the shoes of the Nigerian state and its officials, the social media cannot but be a cusp of frustration and irritation. Two youth revolts in Nigeria, separated by 42 years in time, make this frustration very unbearable an experience. They reveal the spatial difference in weaponry of youth revolt and the lacerating irritancy of the social media to the rulers of Nigeria…

Trump: This Election Is Far From Over
United States President Donald Trump said on Saturday his campaign would begin challenging US election results in court week after media outlets called the race for Democrat Joe Biden, saying “this election is far from over.” “We all know why Joe Biden is rushing to falsely pose as the winner, and why his media allies are trying so hard…

Anti-Social Media Bill: Fear Of The People?
The abrupt degeneration of the #EndSARS protest into a cycle of bloody violence, vicious destruction of properties and looting of both public and private properties worth billions of naira across the country has given rise to series of controversies and heated debates, both online and…

Outrage As IGP Directs Policemen To Use Force On Protesters
Searing criticism and outright condemnation have trailed Saturday’s directive by the Inspector General of Police (IGP), Mohammed Adamu, to policemen to use ‘all legitimate force’ against ‘riotous protesters’ in the country. Adamu also ordered the deployment of ‘legitimate force’ to protect lives and properties of citizens…

Who Is Afraid Of The Social Media?
Nigerians, like nationals of other countries, have continued to enjoy the benefits that the social media offer since the advent of such platforms like Facebook, Youtube, Myspace, Twitter, WhatsApp, LinkedIn, Instagram, among others, especially as it was discovered that these platforms make news dissemination easier and faster…

Travelling from Nigeria to South Africa during COVID-19

Planning Your First Trip to Ethiopia? This Information Will Help You!