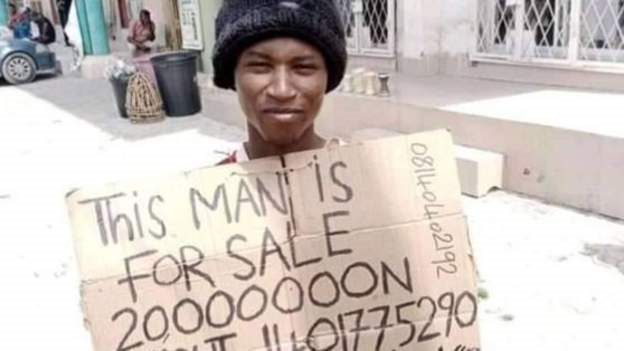 The Islamic police in Kano State known as Hisbah have arrested a 26-year-old man, Aliyu Na Idris, who was trending on social media last weekend for putting himself up for sale due to what he called poverty.

“Yes we arrested him on Tuesday and he spent the night with us. What he did is forbidden in Islam, you can’t try to sell yourself no matter your condition or situation,” the commander said.

The arrested tailor, who had been speaking to journalists before his arrest, said he was in a huge financial mess, hence his decision to put a N20 million price tag on his person promising to wholeheartedly serve his buyer.

“The decision to sell myself was due to poverty, I plan to give my parents N10 million when I eventually get a buyer, pay N5 million as tax to the government, give N2 million to anyone who helped me get a buyer and keep the remaining for daily upkeep,” Aliyu told journalists in Kano before his arrest.

Military intervention not enough to solve Nigeria’s security challenges ― US Consulate, others