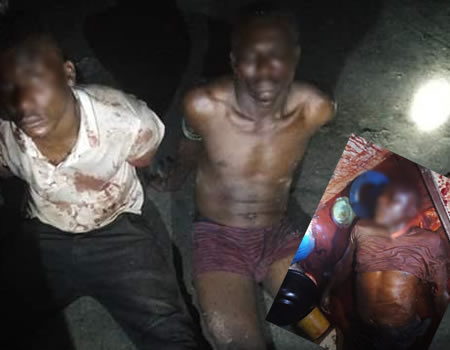 The Delta State Police Command has confirmed the murder of Mr Pius Ukrakpo, who was allegedly stabbed to death for running after another man’s wife at Jeddo community in Okpe Local Government Area of Delta State.

Onovwakpoyeya, a DSP, said the husband of the woman, who killed Mr Ukrakpo ably helped by his younger brother, had been arrested and would be transferred to the state CID and charged for murder.

Mr Ukrakpo, the deceased, was allegedly stabbed to death by the husband and brother-in-law of one Mama Ejime, whom the deceased was purportedly making romantic overtures to.

The incident happened at Hospital Road in Jeddo.

The report said in setup after much love overtures, the said Mama Ejime, who had earlier warned that she was married, lured the alleged randy man to her house, unknown to him (Mr Ukrakpo) that an ambush had been laid for him.

Perhaps relishing the rare opportunity offered him on a silver platter after many pressures, Mr Ukrakpo rushed to the lady’s house, but unknown to him that messengers of death were lurking around.

It was gathered that when Mama Ejime’s husband, identified as Papa Ejime and his brother, who had been placed on red alert, suddenly showed before the action began, and angrily stabbed Mr Ukrakpo to death.

The duo reportedly went ahead to pour pepper on his body, until they were sure he was stone dead.

Sources said before swooping on the straying dog, Mama Ejime had locked the house’s burglary proof, in a bid to ensure successful execution of the plan.

Sources narrated how Mr Ukrakpo roared and cried vainly for help while reeling in pains, but before neighbours got to the scene, he had given up the ghost while the lady, Mama Ejime, reportedly bolted away.

The tragic incident got to the ears of members of the local vigilance group, who swiftly swooped on Papa Ejime and his accomplice, arrested and handed them over to the Police at Orerhokpe Division in Okpe Local Government Area.