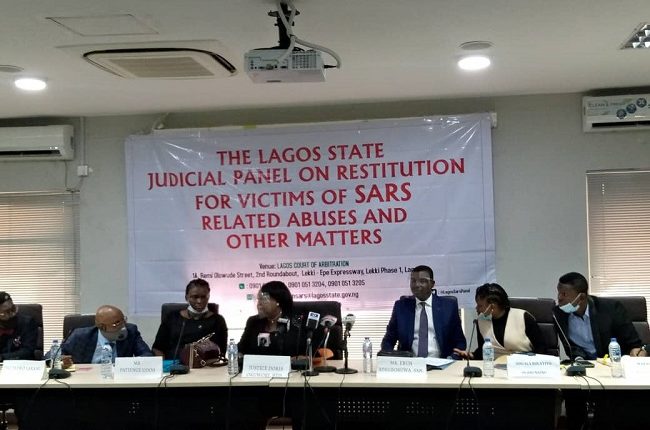 THE retired Justice Doris Okuwobi-led judicial panel of inquiry on the Lekki shootings and SARS atrocities on Friday paid an unannounced visit to the Military Hospital, Ikoyi, Lagos.

It was gathered that the panel was at the hospital based on a tip-off that corpses of persons allegedly killed at the Lekki Tollgate by soldiers were being kept at the hospital.

There were allegations that soldiers of the Nigerian Army killed some protesters and injured several others when they invaded the EndSARS protest ground in the evening of October 20, 2020.

To establish the truth of the matter, Justice Okuwobi and other members of the panel, accompanied by observers from civil society organisations and journalists, paid an unscheduled visit to the hospital but were initially denied access into the facility by soldiers manning the gate.

He told the soldiers that the panel had vital information at its disposal but it had no evidence that corpses of the EndSARS protesters were being kept at the hospital.

He said: “The visit to the hospital is on the authority of the president and not only the Lagos State governor, Mr Babajide Sanwo-Olu.

“We are following due process. It is important that we visit the mortuary as it will help our findings but if we are not allowed access, we will go back and take other actions. We won’t force ourselves in. We heard this hospital is controlled by 65 Battalion and under the 81 Division. We are also taking steps to reach military authorities.”

The panel members were eventually allowed in and led round a building under construction by General A. I. Taiwo. But there were no corpses or patients sighted by the panel members and members of their entourage. Neither the panel members nor military officers at the hospital spoke with journalists after the visit.

We have video clips of shootings –LCC

Earlier, the Managing Director of Lekki Concession Company (LCC), Mr Abayomi Omomuwasan, led the panel to Lekki Toll Plaza to assess the scene of the shootings by soldiers. Omomuwasan said the LCC had the video footage of the shootings carefully kept, adding that the company was yet to conduct any private investigation into the incident.

“We have the Toll Plaza 1 and the Lekki toll bridge, which is also known as TP3. We have the last location, which is around the Chevron area. It is our main office but we are yet to collect toll there. It is Toll Plaza 2. This is where the shootings of that day occurred and we have the video footage, as I said earlier.”

After the tour of the site, retired Justice Okuwobi said, “We have just visited the scene of the shooting but we have not conducted any questioning because the legal representatives of the Lekki Concession Company are not here present. So we will have to adjourn to November 3 for a continued hearing of the case.”

Members of a rights group, the New Nigeria Network (NNN) held a peaceful protest within the premises of the Lagos Court of Arbitration, the venue of the sitting of the panel, saying that Governor Babajide Sanwo-Olu lacked the competence to set up the panel.

A co-convener of the group, Adesina Ogunlana, said: “It is our contention that the invitation of the army by the governor into a case of peaceful, non-violent and unarmed civil protest cannot be separated from the dastardly action of the army shooting at peaceful protesters with all its tragic consequences.

“It is in view of this that we say Governor Sanwo-Olu lacks the competence to set up any inquiry panel into the Lekki shooting of EndSARS protesters. “To this end, we state that the Okuwobi judicial panel, despite all clear indices of competence and integrity, equally lacks competence to inquire into the Lekki shootings for it is composed by those that are involved in the heinous scandal, to wit Governor Babajide Sanwo-olu. NNN therefore demands an independent people’s inquiry into what we assert as Lekki massacre of EndSARS protesters at Lekki on October 20.”

A crawling sensation on my body