Lekan Are: A tribute to a warrior for all battles 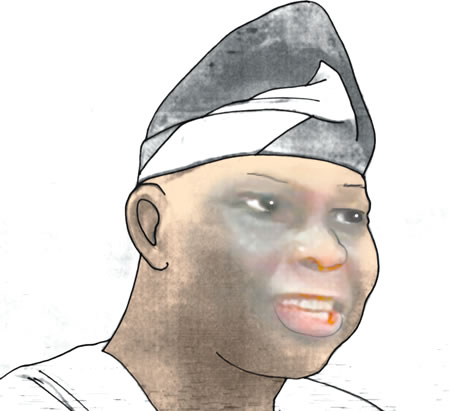 In the forest of songs

yours is a fertile lyric

weaved for every ear.

In the sky of words

your lines are rainbow,

brighter than the moon,

stars. Are, now that the

flute of death blew beyond the seven hills

of Ìbàdàn, I offer an

elegy to the man whose

a man whose anvil forged the future we

the forest. If death would

have loved to receive money, we would have

If death would have loved

to be offered a thousand

rams, we would have loved to slaughter them.

But death took you,

beyond the earth where

the feet of children learn

to walk without stumbling.

Before the advent of the

media, your words travelled beyond the

four walls of our country.

Before the arrival of death, you were the king

ordinary. Now that the

song of farewell occupies the sky,

Are, let my elegy adorn

the world. Today there

are no birds to sing

because of your demise.

because your death broke the camel’s hump.

is that of a warrior. Your

memory remains unbroken despite the

Farewell, the mountain that bends the arrow of lies.

Farewell to the son

Farewell to the scion

Let me now shift gears to the tedium of history.  The late Dr. Lekan Are (1933-2020) was the  founder  and  Chief Executive (CEO), Kakanfo Inn and Conference Centre, Ibadan. He was also the chairman, University Press Plc., former General Manager, Ogun-Osun  River  Basin Authority,   and  the  longest-serving  director  on the board of Punch Nigeria Limited. The late Are was a member of Ibadan Elders Forum and a strong pillar of Government College, Ibadan Old Boys Association (GCIOBA). The president, Government College Ibadan Old Boys Association (GCIOBA), Chief Wale Babalakin, in a statement, said: “With gratitude to God for a life well spent we announce the exit of our dear patron and trustee, Lalekan Emmanuel Are (1948, Field House), President GCIOBA 1989-2006. Lekan Are is widely known for the passion with which he championed the GCI cause and everything GCIOBA, Lalekan Are was the epitome of a great Old Boy.”

Chief Lekan Are will be remembered as an Afrophile, a custodian of the Yoruba culture and a multiculturalist. In his lifetime, he portrays the knowledge of the continent which includes engrained familiarity with different myths, folktales and socio-cultural belief in Nigeria and Africa as well. Also, in his engagement with Africa, Chief Are extends his representations of the continent to its people. He deconstructs earlier notions that majority of Africans flux into the West without a sense of purpose. He is a grand believer of Africans having a sense of purpose and rooted in culture where they come from.

His ideas and ways of living was that of the Afropolitan, one who believes that in spite of their culturally hybrid nature, one does not sever ties and relationship with one’s African roots. Often times, he has illustrated this attitude with his narration of the story of one of his family members who married a Japanese. The family not only maintains contact with the Yoruba culture, they transmit both Yoruba and Japanese customs to their children too. A humanist and an accommodator of culturally different people, he always insists that there are people who seek to be understood beyond the rigid limits of their statehood. Hence, an affiliation to a country should hardly be the basis for understanding a human being in their totality. This worldview is well espoused in the story of how he travelled to Brazil and met Yoruba indigenes with whom he bonded passionately. Even though he is a firm displayer of the Yoruba culture, he also demonstrates a flair for cultural intermingling and interpenetration both within and outside the continent. As a major proponent of interracial mingling and inclusion, Chief Lekan Are gives primacy to interracial marriages and interethnic relationships. He is also reputed for encouraging Africans to always place cultural communality over the divisiveness of religious difference.

Are Lineage in Different Ages

Like the moon contrasts the grey of the sky

Once seen through a glass darkly

The Are lineage of Ibadan has created a most impressive historical narrative over time. In the old era of the 19th century, they were great warriors, with one of them—Are Latosa—rising to become the ultimate political leader of the city and the overall Generalissimo of the Yoruba. Are Latoosa was famous for the greater part of the nineteenth century, and was actually the most powerful in the last quarter of that turbulent era. The Are managed a huge Ibadan empire at a time of relentless and coordinated opposition from multiple corners and sources. Oba I. B. Akinyele, who wrote a book in 1951, Iwe Itan Ibadan, on the history of Ibadan documenting this era, paid scholarly attention to the tembelekun and ote, the nasty twin of intrigues and conspiracies that defined this era. Thus, as the empire made the Are face ogun (war) abroad, there were tembelekun and ote at home also, and there were just too many of them for one person to manage. Samuel Johnson who also recorded that moment painted a picture of actions, complicated decision making, rivalries, and difficult conflict management efforts. The Are was able to stand at the center of it all. The empire and its leader dominated the events. Samuel Johnson wrote under the shadow of the Ibadan empire. His composition and portrait of the Are used the language of the empire—muscular, imperial, dominating.

As I fell on the past of the distinguished Are lineage, I composed a new song:

the hen who challenges the vulture

The vulture circles the hen

Smiling, the hen teases the vulture:

Become a hawk if you want to eat me

Or wait for my death to eat the carcass

What can the vulture do to a hen?

The war hawk of Ibadan

A wildfire that stays on the roof

Daring the landlord to fetch fire

Air, the husband of fire

The war captain of Ibadan

Summoning the ọmọ Odùduwà with a command;

Arm yourselves for battle in the morning

I, Yanbíọlá, the war general

Who sleeps outside until the war is over.

Never tired of wars, he roams the world

The restless spirit of Ibadanland

Wait for him if you dare!

The offspring of a compound

Àrẹ the offspring of a thousand quivers

As his thirst rumbles

Àre, he that pours water away

On hearing the rumbling of the rain

When the rain rumbles and refuses to fall

Yanbíọlá turns the Nile into a big pot

To supply water to the city.

If the rain so chooses

The late Chief Lalekan Are extended the glory of the lineage, carrying the genes of the older members of the lineage. He added positively to them in aspects of business, management, administration, institutional leadership, and community organizing. His mantra was hard work, analysis based on facts, the correlation of process with outcome, judicious use of resources, empathy and compassion. The foundation of his life and career was laid many decades ago. As a young man in the grammar school and university, he combined excellence in sports with distinction in scholarship.

Dr. Lalekan Are’s style shared many things in common with the warriors of old. He was a straight shooter, although not of guns but of words. Quick to the point, forever dramatic in his actions and choice of words, and very witty, Dr. Are was effective in getting to the bottom of issues and taking decisions based on facts and good judgment. Like his ancestors, he was a fearless warrior. His weapons extended to the realm of ideas and ideologies. A warrior for all battles, he courageously took up  for many issues with extensive social and political import.

Oh, spirit of the hills!

Rise up, oh warrior, rise up

The fearless, never bothered by threats

Baba hears, Give way! Give way!—he refuses to

He who witnesses Baba Ayọ̀ and Death in

a duel does not live to tell the story.

Baba Dàmọlá, show the face of the wicked:

The hyena who roams the jungle, taunting

the dogs to emulate him.

we think no evil, speak no evil

Hear no evil of Baba wa

Before I sacrifice to Òkè’bàdàn

Lord of the Hills

Bless my kola to multiply

May I never see the wrath of Baba

Rats see the cat and run.

not once, but twice

For they who scheme evil

against you yesterday morning

Are dead by day break.

Baba, Lord of the land and sea

Five men in one, never to be subdued,

Tiger of the plain,

to say your incantations

Grind on the thick stone

to make your charms

Praise us, when you mean it

abuse us when we deserve it.

We bend and bow

to avoid the fiery eyes

to avoid eyes of blood

to avoid the tongue that lashes

to calm your temper.

He watches our war steps

We, who never run away from death

We wage wars at four corners of the house

We told him the four:

The bow carrier in front

The quiver carrier in the middle

The arrow carrier stays to the left

The gun carrier at the back.

Lekan, master of our moves.

Are turns into an Egbinrin

Offspring of the slim Iroko tree

If there were no cloth

We would have misbehaved

Egbinrin would have offered the feathers

For us to fool the world.

If you are pursued by death

It will not catch up with you,

Eat Kola, the nut of life

The bitter kola that elongates life

May you live long

The sweetness of life

You will live a sweet life

No one chooses water as an enemy

May you become water

Water that has no enemies.

Who is grateful for favors

On the bad, a thousand favors

A fit man with

Who weep in the wilderness

Who plant lotus on dry land

The water with no enemies.

And after the dance, let us close with a final meditation:

Will handle a photo album with fragile fingers

And its dust will turn breathable air,

While they sniff the nostalgic smell

Of your youthful posture

In black and white

Ajanaku nla, we will see life the way

It is meant to be

An assemblage of your youthful bravery actions,

Which will be imagined through the eyes

Who were once lads sitting at your

Feet that walked this earth…

I remember when waters were clear

death was not a word

nor sorrow ever heard

we bathed in milky lakes

Chief, your actions are living on.

Professor Toyin Falola is the Bobapitan of Ibadanland

There are lapses from govt in implementing agricultural policies —Adesola