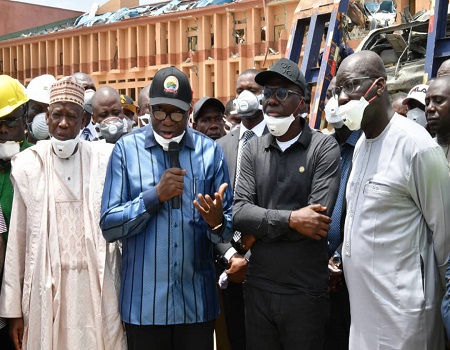 The 36 states of the federation under the aegis of the Nigeria Governors’ Forum (NGF) on Saturday donated the sum of N200 million into the Abule Ado/Soba Emergency Relief Fund set up by the Lagos State.

Recall that Governor Babajide Sanwo-Olu had on Monday announced the donation of N250 million to the fund out of the N2 billion Appeal Fund for the Abule Ado explosion victims.

The donation was announced by the NGF Chairman, Governor Kayode Fayemi who led the delegation comprising of Governor Godwin Obaseki of Edo State and Governor Abdullahi Ganduje of Kano State to the scene of the ugly incident to review of the situation before reporting back to the Forum at its next meeting.

Governor Fayemi who expressed concern over the level of devastation, however, thank God for the low casualty recorded sequel to the prompt emergency response from various stakeholders.

While presenting the N200 million donation on behalf of the 36 State governors, Governor Fayemi expressed optimism that as the information gets back to the Forum, there is the likelihood that Governors would make more donations according to each state’s capacity.

In his assessment of the development, Governor Fayemi who blamed the explosion on the disagreement between Federal and State Governments on ownership of land, he applauded the Lagos State Government for the attention given to the place, assuring that such issues would be addressed going forward.

While showering encomium on the Lagos State Government for its proactive decision to ensure that the issue of building on pipelines corridors are averted, the NGF Chairman expressed optimism that a more decent and modern community will evolve from the misfortune.

During the visit, the Governors sympathised and commiserated with those who lost loved ones and properties destroyed by the unfortunate incident and hope that this never occurs again.