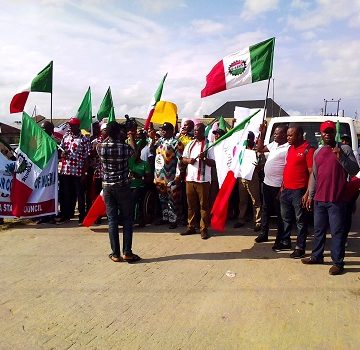 THE Organised Labour on Tuesday gave December, this year, as the final deadline for the full implementation of the N30,000 new national minimum wage.

Besides, Labour warned that any reduction in the N30,000 agreed by the Tripartite Committee on the National Minimum Wage; as contained in the committee’s report to the President or any further delay in its passage will lead to devastating consequences.

The President of Trade Union Congress (TUC), Comrade Bobboi Bala Kaigama and the Secretary-General of the Association of Senior Civil Servant of Nigeria (ASCSN), Comrade Bashir Lawal, gave the warning at the National Executive Council (NEC) meeting of the ASCSN, held at the Chida Hotel, Abuja on Tuesday.

They both warned that labour would not accept anything less than the N30,000 agreed by the Committee, as Nigerian workers patiently await President Muhammadu Buhari, to forward the Executive Bill to the National Assembly, for its passage into law.

In his speech, Comrade Kaigama, who is also the National President of ASCSN, stressed the urgent need to fast-track the implementation of the newly agreed national minimum wage.

Specifically, he said the expectation of labour is that the full implementation of the N30,000 new minimum wage should not exceed December.

Though Kaigama stated that he would not pre-empt President Buhari that the N30,000 agreed through the process of tripartite negotiation could be reduced, but he quickly warned that the consequences of reducing or delaying its implementation would be very devastating.

He said: “The Federal Government is advised to avoid any action that can delay or truncate the process of enacting the new Minimum Wage Act as the consequences of allowing that to happen can be very devastating.”

According to Kaigama: “It is worthy of note that the single most important issue agitating the mind of an average Nigerian worker today is that of the new National Minimum Wage, the report of which was presented to Mr President on Tuesday 6th November 2018. It is apt to state that against all odds the Tripartite Committee that negotiated the new Minimum Wage was able to scale all hurdles and agreed to the sum of N30,000 as the new Minimum wage for the country.

“It is on this premise that I strongly want to appeal to the Federal Government to fast-track the process of enacting the new National Minimum Wage into law.

“Our expectation is that the Government should be able to complete the entire process before the end of this year so that workers who have waited for so long can begin to enjoy a new lease of life provided by the newly agreed minimum wage.”

The TUC president also regretted that the core civil service, which is the engine room of government, is the least paid in the Public Service; since other segments thereof have had their emoluments beefed up over the years.

He explained that even though civil servants, for instance, possess the same qualifications and experience as their counterparts in the Parastatals and Agencies, “yet, the salaries of these other employees are, in most cases, three times more than that of officers in the core Ministries.”

He added: “This situation has been made worse by the fact that since 2010 when Salary Relativity was carried out in the core civil service, no salary increment has been granted to civil servants except for the N900 monthly that was added to the emoluments of senior officers across board after N18,000 was approved as the National Minimum Wage in 2011.”

The Secretary-General ASCSN, Comrade Lawal, said they were holding President Buhari to his words that he would send the report submitted to him to the National Assembly.

He explained that the President should send the bill to the National Assembly before the next two weeks, saying, “we want it done less than two weeks; we cannot wait till the end of November because we want the minimum wage achieved this year.

“We are taking Mr President for his words now, but we have a timeline on when we will swing into action. Our members are ready and only waiting for directive; we are prepared because as we have always say, we have never gotten anything on a platter of gold.”