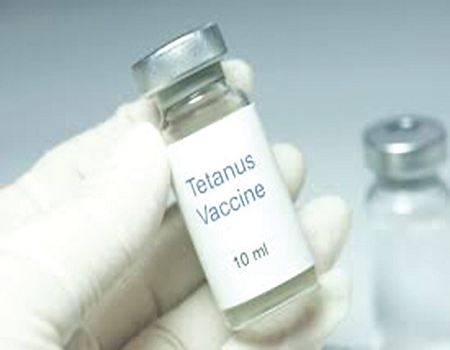 The Kwara Government says it will commence tetanus vaccination in 10 local government areas of the state from Oct. 12 to Oct. 16.

Dr Michael Oguntoye, the state Director of Primary Health Care, Ministry of Health, announced this during a meeting of stakeholders on Maternal, Neonatal Tetanus Elimination Campaign in Kwara.

Oguntoye noted that the vaccination would take place in local government areas that are volatile to the disease, including Asa, Baruten, Edu, Ilorin East, Ilorin West, Irepodun, Moro, Oke Ero, Oyun and Patigi.

The epidemiologist added that the state government had earlier paid its counterpart funding to support primary healthcare delivery in the state, which made it possible to commence a series of intervention programmes on child killer diseases.

According to him, the programme would cover girls, women and pregnant mothers who are between the ages of 15 and 49 years.

He also stated added that it would involve the use of fixed and temporary posts such as identified health facilities, schools, churches, mosques, traditional rulers palaces, motor parks and markets.

Dr Bankole Olugbenga, of the state Primary Health Care Development Agency explained that tetanus is one of the six child killer diseases in Nigeria.

He described it a serious disease caused by a bacterial toxin that affects the nervous system.

He added that it leads to painful muscle contractions, particularly of the jaw (locked jaw) and neck muscles, while it can interfere with ability to breathe and can threaten life.

Olugbenga observed that neonatal tetanus is the leading cause of death in developing countries, such as Nigeria, where a high the proportion of deliveries take place at home or in places where hygienic conditions may be poor.

The expert said that inadequate maternal vaccination contributes to the occurrence of the disease, saying that tetanus elimination needs continuous vaccination programmes because the spores are widespread in soil and faeces.

He said: “Newly born baby with tetanus has a normal ability to suck and cry during the first two days of life and will be unable to suck normally and become stiff or has spasms between two and 28 days of age.”

He warned that maternal tetanus, occurring during pregnancy or within six weeks of the end of pregnancy, can result in miscarriage or abortion.

Govt to invest on 2,000 entrepreneurs in Ekiti