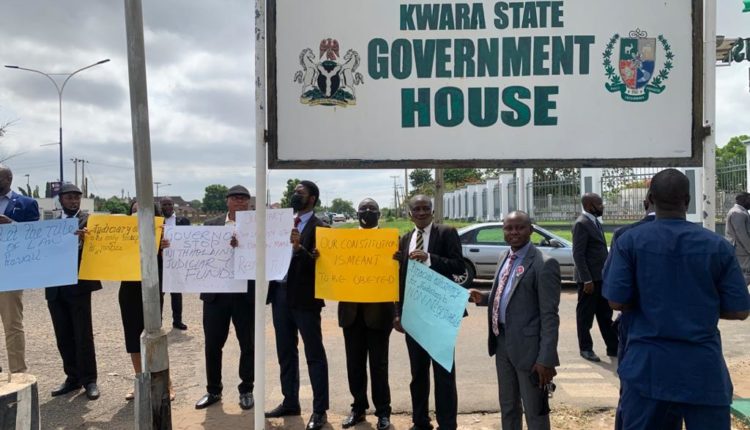 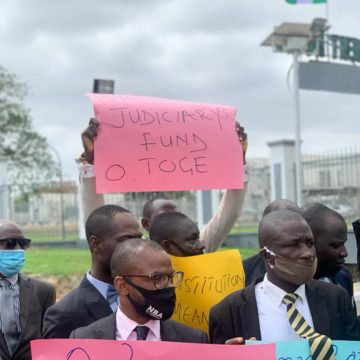 Members of the Nigerian Bar Association (NBA), Ilorin branch, on Wednesday, staged a peaceful demonstration in the state capital to back the growing call for financial autonomy for the judiciary in the state.

It is recalled that members of the Judiciary Staff Union of Nigeria (JUSUN) in the state had embarked on indefinite strike action for about two weeks over lack of financial autonomy for the judiciary at the state level.

Speaking with journalists, the chairman, Ilorin branch of the NBA, Abdulganiyu Bello, who led his members on the peaceful demonstration, decried the attitude of governors to the financial autonomy for the judiciary in their respective states.

He challenged the governors to respect the rule of law and give effect to the independence of the judiciary financially to be able to perform without hindrance.

Bello, who noted that the 2014 court verdict had settled the controversy over the financial autonomy of the judiciary, explained that democracy would thrive with strict adherence to the rule of law.

He maintained that the industrial action of JUSUN had stalled court proceedings nationwide with its attendant adverse effects on members of the bench and the bar.

“We are here in compliance with the directive of the National Secretariat as given by the National President, Mr Olumide Akpata, on the need for the government to give effect to the financial autonomy for our judiciary. That is why we are here to call on the governor to obey the rule of law.

“It is stated in our Constitution if you look at Section 121. It says that all funding shall be handed over to the heads of the judiciary in various states. So, we want to call on the Governors to obey the rule of law. If the rule of law is obeyed, democracy will strive well. That is why we are here to register our support to JUSUN.

“The strike embarked upon by JUSUN has affected court proceedings, and you can see a lot of things happening to people. If you want to assert your right, you go to court. As it is now, courts are closed. We want to call on the governments to act on this so that we will all have a free society as required”, he said.

When reminded that the Chairman, Nigeria Governors Forum (NGF), Dr Kayode Fayemi of Ekiti State, assured that the financial autonomy for state judiciary would be implemented from May this year, the NBA chairman urged the governors to walk their talks.

Also speaking, a former Publicity Secretary of the Ilorin branch of NBA, Mr Sunkanmi Olorunnisola, warned that the nation’s democracy is endangered in a situation where the judiciary is not financially independent.

Olorunnisola described the judiciary as an arm of the tripod that upholds the nation’s nascent democracy.

In spite of the huge investment in the water sector by the government and international organisations, water scarcity has grown to become a perennial nightmare for residents of Abeokuta, the Ogun State capital. This report x-rays the lives and experiences of residents in getting clean, potable and affordable water amidst the surge of COVID-19 cases in the state. Kwara lawyers stage protest on judicial’s financial autonomy