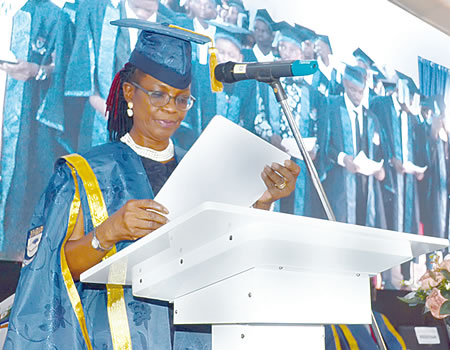 The vice chancellor of KolaDaisi University (KDU), Ibadan, Professor Kolade Luke Ayorinde, has said that the vision of the university is to be world class institution for the production of graduates who are able to respond to the socioeconomic needs of a knowledge-driven economy.

He made the remarks last week Wednesday at the institution’s first matriculation ceremony, which took place at the Sherifat Agbeke Auditorium of the institution.

Professor Ayorinde said the establishment of KDU was necessary to complement the efforts of the government in tackling the challenge of access and affordability to qualitative education, having realised that every year, due to limited space and carrying capacity in the nation’s higher institutions, many qualified candidates cannot be absorbed.

He revealed that the university had begun academic activities with two faculties of Applied Sciences and Arts, Management and Social Sciences, and 18 programmes in areas the university planned to excel in the nearest future.

The vice chancellor admonished the matriculating students to imbibe the spirit of sacrifice, hard work, discipline, diligence and purposefulness while they pursued their degrees in the university, and to follow and obey the rules and regulations.

The guest lecturer at the event, Emeritus Professor Ayo Banjo, speaking on the topic, ‘What is a University?,’ said “if students are not sure of why exactly they are admitted to a university, it is the duty of the university itself to be clear about what benefits it intends to give the students and what life-long changes it intends to make on their lives.”

He encouraged the students to make the most of the once-in-a-lifetime opportunity of university education.

Speaking at the event, the founder, Chief Kola Daisi, the Basorun of Ibadan Land, noted that his passion for education stemmed from his experience and exposure as a child, while the idea of founding a university was conceived when he realised that his mission in this segment of national development would not be complete without a shot at the tertiary level.

“Thus, having KDU as a university to reckon with is my fundamental desire and the legacy I want to leave behind. The almighty God has been gracious to me and therefore, I consider it an honour to bestow on the coming generation a legacy we can all be proud of,” he stated.

He, however, noted that he would not have been able to achieve the great feat without the help and support of his family, especially his wife, Sherifat; close friends, associates and other well-meaning Nigerians.

The chairman Board of Trustees, Emeritus Professor Oladipo Akinkugbe, thanked the guest lecturer, Professor Emeritus Ayo Banjo, for the “highly intellectual lecture” and congratulated the founder, describing him as “a man who doesn’t touch what he doesn’t adore.”

He acknowledged the immense contribution of Chief Sherifat AgbekeDaisi, who was not physically present at the occasion. He then announced on behalf of the founder, BoT and the governing council, headed by Professor Adeniyi Oshuntogun that the new auditorium where the matriculation ceremony took place had been named after her as ‘Sherifat Agbeke Auditorium’.