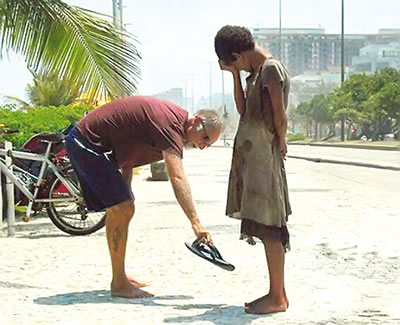 I read a story a couple of years back of a CEO who raised the minimum wage in his company to $70,000 because he realized that his staff could not pay their rent or afford some nice things just because the minimum wage did not allow for that. A lot of people laughed at him, some even said his company would crash and burn because of it. The truth is that, it did not. Although some people said his staff would end up complacent or too satisfied that they would not be able to give a good performance under this his radical innovation, the opposite happened. He got a loyal, dedicated staff full of happy people who were only too happy to give their best to a company they loved and felt appreciated them.  A lot of his employees ended up buying houses, cars; others got better apartments and generally lived a better quality of lie which was reflected in their work. Because he took a pay cut from over a million dollars to seventy thousand dollars himself, he ended up with a regular car and as a surprise his employees got him a Tesla, just to say thank you. What impressed me the most about that story was the man’s kindness. He could have easily heard about how his employees were struggling and chosen to ignore it. After all, he did pay them the agreed salary rates at that point! But rather he chose to do more, to actually do something about it and bring relief to his employees.

2020 was a tough year, a year full of unexpected events and surprises at every turn. A lot of lives were lost and a lot of people were grieving and needed hope and relief throughout the year. It was a year full of unprecedented events especially because of the pandemic. Reading that true story got me thinking about how easy it is to forget kindness. In a world full of pain and grief, it is so easy to think only of oneself, to become so caught up in the hustle and bustle to simply survive in the face of odds that one forgets to notice others but the simple act of kindness reminds us to take a moment, to step back and see others. In the process of noticing others, we actually bring relief to ourselves for the Holy Book reminds us that giving is what makes us happy. And what is kindness if not giving to others, taking time out to notice, to care; it is what makes us human. In the craziness of 2020, we learned, well I learned and I think other people did too, that we matter to other people. As the global pandemic forced us to slow down, to take stock of our own lives, it also helped us appreciate one another. We realized that we needed doctors, grocery workers, farmers, nurses and all other essential workers. We began to see that even taking care of our health is a collective effort, you stayed home and wore a mask to protect those around and as they did the same, we flattened the curve and help reduce the spread of the virus. It became an us rather than a me affair and suddenly, it had never become more important to care, to truly care.

In our shared humanity, we also began to notice what was wrong with our societies. The evils of an unkind leader, the brutalities of the system that was supposed to protect us and perhaps the perceived nonchalance of the people whose salaries we pay. It became time to speak up, to call out principalities, to topple the set order and fight for a better order. And in the process, we started to notice one another more, to notice the common values that bind us all together. This was evidenced in the uprising of the #blacklivesmatter and the #EndSARS protests that shook up the world. It was a time where we were forced to look inwards and around us, and change began to make sense to us. We were no longer comfortable with how it had always been, change became necessary. The thing about changing a system is that it takes time to do it. It starts with one step, yes, but it does not end there; it is a long arduous journey that takes perseverance, diligence and hope. Well, I think we all need to learn the value of that in this fast paced world. One way to start that journey to change though is through kindness.

Kindness never fails. In this fast-paced, internet driven world, we have become accustomed to clapping back at haters, to giving just as hard as we got, to retweeting trolls and laughing at the cleverness of mean come backs. This essentially culminates in what is now infamously known as “cancel culture”, where a wrong tweet could lead to loss of jobs and in some cases even the loss of life. The truth is that we absolutely have to hold others accountable for the things that they do but there is a thin line between accountability and this mass unforgiving nature of forcing everyone to think the same way. That is not accountability, it is hypocrisy masquerading as intellectualism and I fear that as we gradually let this go on, we stifle creativity and differences and create a world that no one really wants to live in. It is kindness that lets us look at another person and strive to give them the same grace that we would like extended to us. To try to understand their thought process and recognize that as humans we would make mistakes and grow from these mistakes, that we are not somehow entitled to the privileges that we hold but that the unfairness of life is what creates these gaps. In kindness, we bridge the gap and strive to treat others exactly as we would like to be treated.

The beauty of kindness is that it does not result in an unsatisfied, belligerent people but rather it reminds the other person to be kind too, but even if our kindness is not reciprocated, is it not worth it knowing that you have shown it? I think it is. As the pandemic raged, the CEO whose story I began with started losing money as all companies were and suddenly they were at the brink of collapse. As he evaluated what that would mean for his staff, layoffs and pay cuts, he considered asking the staff if they would be willing to take considerable pay cuts just to keep the company afloat. He was amazed at the answer he received, so many members of his staff were willing to not just take pay cuts but even work for free for a company and an employer that had cared for them when they needed it most; he admitted that reading those letters brought tears to his eyes. That was the result of his kindness. So if you ever see someone suffering or notice an injustice that you have the power to correct and you wonder if kindness still pays: it does, it still does. Think about that as we navigate perhaps our new abnormal normal in 2021.

Stemming the immune havoc of COVID-19