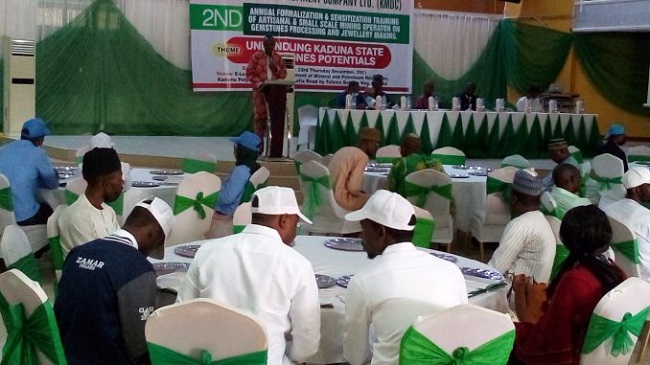 The former President of the Nigerian Society of Minning Engineers, Dr Ebenezer Damisa has observed that Kaduna state has the potential to earn over $5.97 billion annually from sapphire, gold, silver and other processed gemstones.

He noted that the state is endowed with a commercial quantity of gemstones like gold, silver, platinum, beryl aquamarine, emerald, tourmaline, nickel and sapphire (royal blue) spread across 15 local government areas.

Speaking during the closing ceremony of the 36 artisanal and small scale mining operators on gemstones processing and jewellery making in Kaduna, Damisa of Ahmadu Bello University, Zaria, who benchmarked Kaduna state with Israel, said, “Israel has very few gemstones compared to Kaduna state. Israel processed gem export was $5.97 billion during 2020 (despite the Covid-19 pandemic).

“Israel processed gem export to Canada alone was $20.01 million during 2020 according to the United Nations Comtrade database on international trade.

He said, ‘ the Surface rent alone (5%) on a single gem (emerald from Gwantu or Kafanchan) to the government may be given as the average market price of $305,000 per carat, for 10 carats per week will give $7.9 million per annum.”

Thus, he posited that Kaduna can earn as much as $5.97 bn with the current market price if things are worked out well.

Damisa however noted that the state is yet to achieve its full gem potential due to insecurity, poor capital, lack of technical expertise, poor processing knowledge, and poor structuring of the industry.

He said the gems, such as Jema’a blue (Jagindi tourmaline), Zaria green emerald and Antong Sapphire, command premium prices in the international market.

He however urged value addition to the gems to create jobs adding that a gram of Jagindi blue which cost N50,000, when faceted will go for $2,000 or N1.1 million.

In his own remarks, Kaduna state Commissioner for the environment and Natural Resources, Ja’afaru Sani, said Kaduna state is diversifying from oil which would soon become extinct to solid minerals.

He said the training has shown that there are lots of potentials in the state considering what the trainees did with a simple implementation, adding that there would be further training in 2022 including the business entrepreneurship model.

Managing Director/CEO of Kaduna Mining Development Company, Dr Mohammed Usaini stated that, unlike the previous training, this one is for graduates of polytechnics and universities.

He said the training is all-encompassing including processing, value addition, marketing, sourcing for capital etc.

According to him, we have exposed them to how to make use of the training by assessing grants and loans from reputable companies with good business plans.