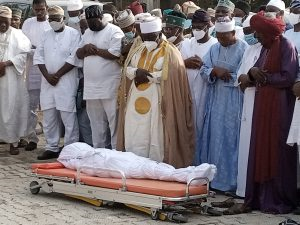 The remains of late retired justice of the Supreme Court, Justice Bolarinwa Babalakin, were, on Saturday, laid to rest at his home in Gbongan, Ayedade Local Government Area of Osun State.

The body of the judge, who died in Lagos State, was conveyed to his hometown of Gbongan for final burial on Saturday afternoon and was prayed upon by joint Imams and Alfas in Osun and was buried at about 4.45 p.m.

The final Muslim burial prayer was, however, led by the by the Mufasir of Osogbo, Alhaji Ishola Olawale, who represented the Chief Imam of Osogboland, Alhaji Musa Animashaun.

In the burial message delivered by the Mufasir, he said the late Babalakin led an ​exemplary life worthy of emulation.

Olawale admonished everyone to live a life that is worthy of emulation and said everyone should always remember that the life lived while on earth would be what we would all be remembered for.