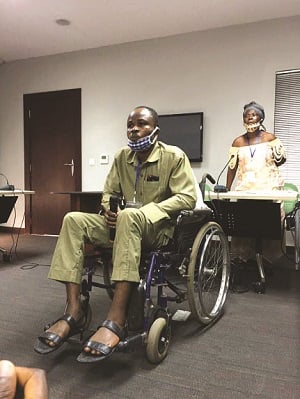 The Lagos State Judicial Panel probing police brutality has awarded N7.5million to a trader, Ndukwe Ekekwe, whose spine was broken after being thrown off a two-storey building at Alaba International Market in Ojo Local Government Area (LGA) by police officers in 2018.

But an angry Ekekwe, 34, described the amount as too inadequate to compensate for his ordeal.

In his petition, Ndukwe told the panel that he was unlawfully arrested at the market on February 16, taken to the Special Anti-Robbery Squad (SARS) head office at Ikeja, stripped naked and brutalised in a torture chamber.

He said the operatives went back with him the next day to his three shops at Alaba, broke the doors open with hammers and looted his phone accessories.

When he raised the alarm, they bundled him to the second floor of the building and threw him off it.

He told the Justice Doris Okuwobi-led panel that he was accused of having stolen phones in his shop.

Now paraplegic, following his severed spinal cord, Ndukwe was brought to the panel from Badagry by his aged mother Nnenna.

Ekekwe identified the leader of the SARS team as Inspector Haruna Hamisu.

But Hamisu said the petitioner was not pushed but jumped off the building.

Delivering judgment, Judge emeritus Okuwobi held that the police failed to controvert much of Ekekwe’s claims.

She said the petitioner led “credible and strong evidence on being brutalised by the police while in their custody.

“The police stabbed the petitioner with a knife, hit his head with a gun, and broke his teeth. These pieces of evidence were not debunked by the respondents.

She added that the panel found out there was a violation of the petitioner’s fundamental right and awarded N7.5 million “as compensation for the torture and inhumane treatment meted out to him by the respondent while in their custody.”

The panel also recommended that an investigation be carried out to fish out the officers who abused and brutalised the petitioner and they should be sanctioned.

But the decision on the value of the award angered the petitioner and his family, who said they had spent over N30million trying to help him walk again, to no avail.

The petitioner’s mother burst into tears.

His counsel, Olukoya Ogungbeje, whisked him out of the panel room, where he calmed him and his mother.

They were calmer when they returned and accepted the cheque.

In spite of the huge investment in the water sector by the government and international organisations, water scarcity has grown to become a perennial nightmare for residents of Abeokuta, the Ogun State capital. This report x-rays the lives and experiences of residents in getting clean, potable and affordable water amidst the surge of COVID-19 cases in the state.  Judicial Panel awards N7.5m to Alaba trader thrown off 2-storey building by police officers in 2018