Judgment on hijab: Osun CAN files appeal, stay of execution 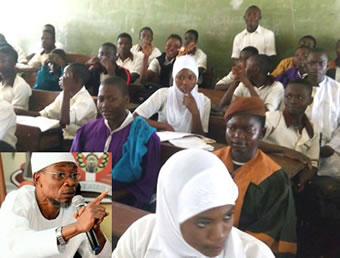 Osun State chapter of the Christian Association of Nigeria (CAN), on Wednesday, filed a stay of execution on the June 3 judgment of an Osogbo High Court, allowing Muslim students in all state public schools to wear Hijab.

This disclosure was made in Osogbo by the state CAN chairman, Reverend Elisha Ogundiya, during a solidarity visit to the state CAN headquarters by the South-West leaders of the association.

CAN representatives from Ogun, Oyo, Ekiti and Ondo states stormed the state to give solidarity to the state’s Christians on the judgment delivered by Justice Saka Oyejide Falola and also expressed their readiness to fight against any form of alleged Islamisation agenda by Governor Rauf Aregbesola.

Addressing the gathering, the secretary of South-West CAN, who spoke on behalf of the association’s zonal chairman, Archbishop Magnus Atilade, Rev Alfred Aro, warned that any attempt by Muslim students to wear hijab to schools after the appeal had been filed would mean that CAN too would ensure that all forms of Christians religious garments are worn to schools in the state.

He noted that Falola’s judgment negated the spirit of secularism of the nation “and it violates the religious rights of the original owners of the missionary schools as agreed upon when the schools were taken over by the then government of Oyo State in 1975.”

The South West CAN also expressed their concern on the ban of morning devotions and assemblies in schools in some states in the country, saying the action must be rescinded.

According to Aro, “we note with dismay, despite several appeals as a law abiding association, the ban on morning devotions and assemblies in some schools in Nigeria especially South-West Nigeria, based on flimsy reason on insecurity is still subsisting.

“Now that President Muhammadu Buhari had confirmed the end to insurgency, we urge all states to unban the unfair decision within the next one month. CAN urges all its members to write to their state governors immediately. Failure to rescind the ban, we implore CAN in the states concerned to take appropriate actions.

“Besides, the association condemned the ban of Religions Knowledge and History in schools, saying it was a ploy by government to use it as an attack on other religions. Such approach does not allow for moral training, upbringing and character moulding in our children who are leaders of tomorrow.”

The representative of the outgoing National CAN President, Pastor Ayo Oritsejafor, Ven Nelson Fadoju, who is also the association’s Director of Planning, Research and Statistics, commended the state Christians for their unity in the face of oppression and for standing solidly behind their leaders in the state.

Despite the heavy security presence of the police and other security agencies around the premises of the meeting, CAN leaders from across the state’s 30 local governments and Ife-East Area Office, Modakeke, attended the parley.

We have commenced contact tracing for confirmed case of COVID-19 in Osun, says…