.I underwent surgery in my final semester which went wrong ―Jesulade .I come from a background that thought little of girl-child ―Afolabi 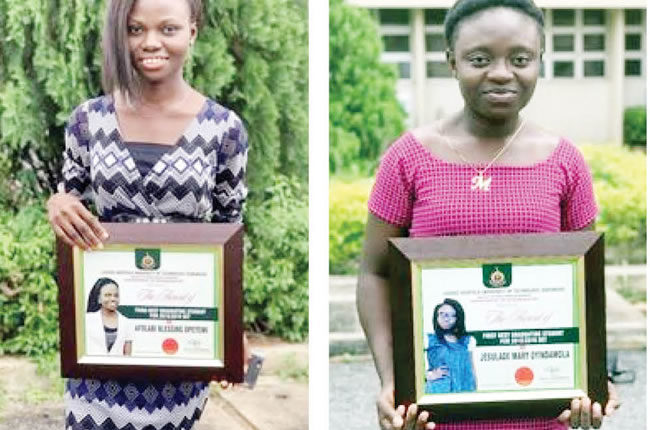 Mary Jesulade and Blessing Afolabi are two out of three students that finished with a First Class, for the first time in the Department of Biochemistry in LAUTECH. They share their journey, challenges and ambitions with ENIOLA OYEMOLADE.

After Mary Jesulade sat for the Unified Tertiary Matriculation Examination (UTME) three times, with the hope of securing admission to study Medicine and Surgery, she finally decided to accept her fate after she was offered admission to study Biochemistry at the Ladoke Akintola University of Technology (LAUTECH), Ogbomoso.

According to Jesulade, the situation was not a coincidence, but “God-incidence”.

“As of when I filled my form, I had no idea what it was all about. Mind you, Medicine and Surgery was still my first choice. My aim was that I first secure admission and then I would navigate from there. Fast forward to when admission decisions came, I was given admission only in Biochemistry.

“This pushed me to research the course and I loved what I found, hence my bonding to it…Asides that, I was convinced beyond doubt that I was in the right department, studying the right course, hence when suggestions to cross, even to the Department of Medicine rose, it fell on deaf ears.”

In her quest to come out with good grades, Jesulade, however, faced several challenges. First was the constant sickness during tests and examination periods. According to her, there was a time she was going from health centre to the examination hall.

“It did not stop until I was determined to put an end to the crisis and prayed earnestly to God about it. I also had surgery in my final semester in school, one which almost prevented me from finishing well but for God’s timely intervention.

“I had issues understanding certain courses at first, but I am glad I came across tutorials right from my registration period. I attended these tutorials diligently and I must say that became a pivotal force to my success in school.”

Jesulade also had issues with her result where she was awarded ‘AR- Awaiting Result’ twice and both times, she had to muster all the courage in her to call for her answer scripts in the affected courses to verify the authenticity of the grade she was awarded. After this, the issue was resolved. Finance was another major obstacle for her, coupled with incessant strike which happened every session or at times semester.

On how she developed her reading pattern, the native of Awe, Oyo State noted that “The first thing I did was to avoid following the crowd. During my early days on campus, I heard people talk about ‘night class’. Poor me, I thought it was a class setting which held at night where lecturers came to teach students. I had to debunk that knowledge of night class when someone explained to me that it was just a gathering of students in the lecture halls to do some personal readings. I knew immediately that I was in no way cut out for that.

“Also, I was not much of the library type. I had just two hard copy textbooks, the rest were soft copies on my phone. So how then did I read? We were given a departmental handbook in 100 level and it contained details and topics for every course I would take throughout my stay in the department. Long before classes commenced, I would sit with my textbooks, read and understand the topics in context and then summarise notable points and draw out structures. I would then read these summaries till I could visually picture my notes in my head. I will not forget to mention the powerful role tutorials played in my life like it was mind-blowing.”

She described her recent feat as one she would always relish and one that shows the sovereignty and supremacy of God.

“When I received my first-semester result (4.91/5.0), it was sufficient motivation to continue the journey. When I resumed 200 level, some senior colleagues on getting to know about my 100 level result advised me to cross to another department so that I could safeguard my first class and graduate with it. Nonetheless, I was convinced beyond doubt that this was the department for me and that I would emerge as the pioneer First Class graduate.

“Events took a twist as my CGPA kept decreasing from 100 level second semester and at the end of 300 level second semester (4.56/5.0), I was at the brink of dropping into second class. I kept working hard, putting in my very best. A ray of hope came along with my 400 level first-semester result as my CGPA increased for the very first time by 0.01.

“The struggle continued alongside several issues, a prominent one was having to undergo surgery in my final semester which went wrong when the surgical site refused to heal up for about two months. I was in pain preparing for my final examinations. But in all, I could see the reliable hand of God working everything out beautifully for me. When I received my 500 level second-semester result, the area titled cumulative class had boldly written beneath it ‘First Class’. The first-ever in the history of the Biochemistry Department; at last, it manifested, the dream was actualised.”

Jesulade is a social reformer who aims to make gradual changes in certain aspects of society. She has a keen interest in fashion designing and as an upcycler, she has incorporated means to convert used tires to durable and affordable furniture pieces under the brand name EnvironFit.

For Blessing Afolabi, who also finished with a first class, she initially believed the unspoken reality that it’s impossible to graduate with a First Class in the Biochemistry department. When she collected her first semester result with a CGPA of 4.91, she was advised to cross from her department to Computer Engineering department so that she could maintain her First Class result.

She, however, decided against the advice due to conviction and maintained her resolve to graduate with a first class even in the ‘formidable’ Biochemistry department.

Describing the achievement as daunting, but rewarding, Afolabi noted that the journey wasn’t a smooth one, “but I’m glad I broke through. I realise I didn’t graduate with a first class just for myself. Due to my result, hope has been lit in the hearts of many that they can also achieve the same feat and even do more.”

Just like Jesulade, Afolabi also wanted to study Medicine at the University of Ibadan, but she gained admission to study Biochemistry at LAUTECH.

Afolabi ascribed her faith in God, resilience, focus and good friends as major factors that made it possible for her to graduate with a first class.

“My friends were like-minded people. Even when the rigours of my department were overwhelming, they encouraged and kept me going. As much I could, I reduced distractions to the minimum by having my day organised. By the way, I didn’t leave a ‘triangular’ lifestyle like most people suppose first class students do―class, hostel, church. I made time for extracurricular activities without affecting my intensive study plan.”

Afolabi’s resolve to graduate with a first class was, however, tested when her CGPA dropped to 2.1 (4.45) in 300 level, and at that time, it was widely accepted that a student’s CGPA cannot rise in Biochemistry department. She had a hard time fighting this mindset and before the next semester examinations, her CGPA returned to first class and she finally graduated with a CGPA of 4.54.

Afolabi also didn’t attain this CGPA without some challenges such as having enough money to meet her living expenses.

“There were times I had to trek home after lectures just to save money to buy handouts and other course materials. Eventually, I got a part-time job as a home lesson teacher to foot my bills in my 200 level second semester.

“Another challenge I faced while schooling was having all the required course materials and textbooks. I had to set dedicated time to go to the school library (normally, I prefer reading at home) as the textbooks I don’t have are there. I also had to photocopy one of my major textbooks just so I could have my copy at hand.”

With this feat, Afolabi has defied all norms as she comes from a background that thought little of the impact the girl child could make in society; they were mostly expected to grow up and bear children, and that is all there is to their lives.

“It took extra faith and struggle for my parents to cater for my education, despite their limited financial means.”

She plans to undertake her Masters degree and PhD in molecular biotechnology so as to develop more breast cancer treatment because breast cancer is the foremost cancer type affecting women all over the world.

“The knowledge and experience I would get from studying this course will help me achieve my goals.”

Asides from being a biochemist, Afolabi is an education enthusiast and writer who has an intense passion for learning and desires to build a standard Biotechnology laboratory in Nigeria to foster a culture of research and innovation amongst Nigerian students.

The deliciousness of garden egg sauce

How my business has thrived despite the harsh economic climate in Nigeria —Abidoye, home decor expert