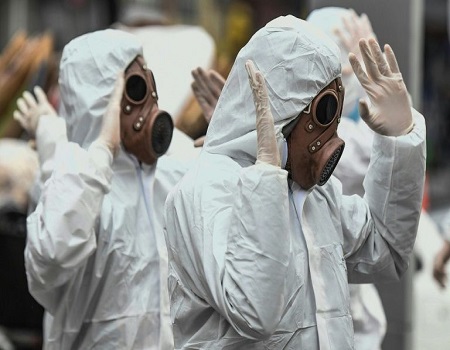 Italy passed a grim milestone on Thursday when it overtook China as the country with most reported deaths from the new coronavirus sweeping the planet.

The world has stepped up its war to try to contain the rapid spread of COVID-19, with several countries imposing lockdowns that are keeping tens of millions of people trapped in their homes.

But the death toll has soared in Europe even as China saw a glimmer of hope with zero new domestic cases reported for the first time.

Italy announced another 427 fatalities on Thursday, taking its total to 3,405, according to an AFP tally.

Globally, the death toll from the virus – whose main symptoms are a dry cough and fever – has risen to over 9,000.

Countries have tightened border controls and unleashed nearly a trillion dollars to prop up the teetering world economy, only to see the once-in-a-century pandemic seemingly spiral further out of control.

China listed no new domestic infections for the first time since the outbreak first erupted in the central city of Wuhan in December, before spreading worldwide.

It appeared to have staunched the virus with strict measures including a complete quarantine of Wuhan since January, meaning the number of infections and deaths in the rest of the world have surpassed those in China.

But there were fears that Asia faces a second wave of cases imported from abroad, with 34 new cases reported in China, the highest figure for two weeks.

US President Donald Trump, who has come under fire for his response to the crisis, charged Thursday that the world was paying for China’s lack of transparency on the outbreak of the new coronavirus there several months ago.

“It could have been contained to that one area of China where it started. And certainly the world is paying a big price for what they did,” he said.

As the toll surged in his country, Italian Prime Minister Giuseppe Conte said the national lockdown, which has been copied around Europe, would be prolonged to April 3, shattering hopes of a quick end to the crisis.

“We will not be able to return immediately to life as it was before,” he said.

France also mooted extending the two-week lockdown ordered this week by President Emmanuel Macron, as the interior minister blasted “idiots” who flout home confinement rules and put others at risk.

With countries paralysed by the pandemic and stock markets imploding, policymakers this week unleashed a wave of measures to shore up the global economy.

“Extraordinary times require extraordinary action. There are no limits to our commitment to the euro,” ECB chief Christine Lagarde said.

In the United States, Treasury Secretary Steven Mnuchin is urging Congress to pass a $1-trillion emergency stimulus package immediately, with many economists saying the US is already now in deep recession.

Trump has said he views himself as a “wartime president”, even as his administration faced growing criticism over a lack of testing for coronavirus and for the speed of its response.

The US has so far shied away from the sweeping restrictions used in China and many European countries, although the streets of many of its major cities have emptied as local curbs come into effect.

Effects of coronavirus on global taxation