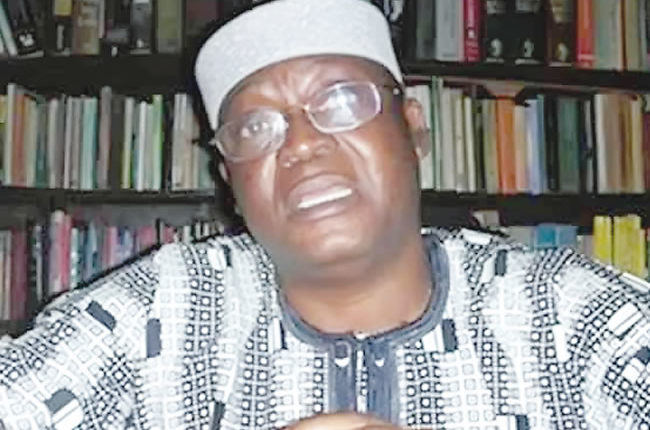 A former Minister of works and chieftain of the All Progressives Congress (APC), Senator Dayo Adeyeye tells ‘YOMI AYELESO in this interview, talks about the need for a new peoples’ constitution and the place of leadership for the country to survive its mirage of challenges among other sundry issues.

WHAT is your assessment of Nigeria for the past six decades?

It has been a mixed bag. On the positive side, we entered independence with high caliber of leaders who were patriotic, dedicated and committed to the development of the country and actually set the country on the right path. Unfortunately, the first republic government was truncated by the intervention of the military in 1966 and a new idea of federalism was virtually scrapped and to all intent and purposes, we have unitary form of government, masquerading and disguising as a federal system. Sincerely, on the positive side, the country has grown in population; it has grown in so many areas. We have more universities now because when I was in the university in the 1970s, precisely when I entered the University of Ibadan in 1975, there were only six universities in this country. But now, we have about 140; same with the number of polytechnics and also secondary education. We have also seen expansion here and there in terms of infrastructure, more airports and other infrastructure development in the country. But by and large, I will say the balance sheet weighs heavily on the side of the negatives.

What do you think is the cause of the negatives?

The most pronounced is bad leadership; visionless leadership; leadership that is not based on moving the nation forward; the fact that our leaders have become so greedy thinking about their interest and self-aggrandisement to the detriment of the majority of the people in the country. Another issue is the skewed system of government. At independence, we had real federal system, going by Professor Kingsley’s definition of federalism. But we now operate a skewed system; a unitary system merely masquerading as federal system and that has not allowed people to have great latitude in managing their own affairs. In the First Republic, people were running their own affairs with little or no interference from the centre and there was healthy competition among the regions to develop. As a matter of fact, the Western Region was doing well and far ahead of countries like Malaysia, Singapore and others. We were developing faster than them. Now, you come in, stop the process and takeaway the power of regions to create so many states that are not viable and make them beggars to the Federal Government. Rather than developing, we are sharing poverty and everybody is reduced to nothing. So, bad leadership; the structure of the country are the bane of our development and we need to sit down and restructure the country.

How do we now overcome these challenges you have identified?

Left to me, it would have been better to have what I will call a nuclear option, which is to say that we have a constitution made by the people, not the one handed over to us by the military. Let all the ethnic nationalities in the country sit down, workout the modalities for representation and then we constitute a sovereign national conference and make a genuine constitution for the country. The constitution that will reflect the religious and ethnic differences, we now operate a skewed system; a unitary system merely masquerading as federal system and that has not allowed people to have great latitude in managing their own affairs. the constitution that will allow every region to develop at its own pace. We need to do that but if we are not ready to do it as I suspect it is not going to happen, then we have to do a wholesale constitution amendment that will be all-encompassing, reduce the over concentration of power at the centre and devolve more powers to the states.

The military deliberately put the names of the local governments in the constitution so that it will be permanent and they did that to favour a section of the country. We have to admit this because of allocation of money to the local government from the centre. The federal revenue should be between the centre and the state and then, states will decide how to run their local government areas. A situation whereby they created the council areas without clear objectives and they allocate money to them directly from the centreis not known in any part of the world except in Nigeria. It is a three tier of government not a Federal Government.

In all of these, how will you describe the administration of President Muhammadu Buhari in the last six years,especially in terms of deepening democracy in the country?

Well, democracy has remained as it is and I still believe that we must leave more power to the states; and each state can decide to give more powers to the local government because the local government should be under the state. We have not had any government that had the courage to do wholesale constitution amendment. I say wholesale constitution amendment because we must realise that a constitution should be the collective agreement of the entire people of the country. That is not the situation at the moment. This constitution we are using was handed over to us by the military without any form of referendum on it. I have heard former president, Olusegun Obasanjo confessed that he only saw a copy of the constitution days after he was sworn in. He did not even know the powers the constitution conferred on him. So, to that extent we have not got the constitution truly made by the people and in that sense, we cannot say we are even running a democracy. We need to go back to the foundation and do a constitution that will be subjected to referendum and approve by the people of Nigeria.

There has been continue calls for secession by different groups in the country, especially from the South. Do you think the present administration has been able to manage the situation well?

The issue of ethnic nationalities agitating to break away from the country is not a new thing. It has been there for a long time due to some grievances that are unaddressed for years. So, I will not blame the present government as the cause of the problems for the agitations. It has been there all along. It goes back to the issue I raised earlier that we need to know that just about 130 years, there was no country called Nigeria, to the extent that my grandfather did not know the country called Nigeria; to the extent that we have different people with diverse languages and culture. Not necessarily separating from the country but at least, let people have some latitude to control their own affairs like we have it in other countries such as Switzerland, Canada and even the United States. If you want to suffocate everyone in one place, of course people will want to break the place and make escape. That is what is happening in the country. It will take great leadership courage to address the issues we have and I am hoping for that in the years ahead.

The politics of 2023 presidential election has begun. What future do you expect to see as the people prepare to elect a new leader for the country?

I am hoping that the next president will have the courage to address these issues: the issue of restructuring, and the rest. The truth is and if you ask those calling for secession, nobody wants Nigeria to breakaway. If we have the kind of the situation we had in the 50s, which allows the likes of Chief Obafemi Awolowo to operate with a lot of freedom in managing the affairs of the Western Region, the agitations we reduce. I am looking forward to have a leader, who will recognise these points; a leader who will not sweep the issues under the carpet; who will bring everything to the open and address it holistically and solve these problems once and for all. Let us go back to where we started from when the British gave us Independence, the 1960 constitution. People were able to manage their affairs without any issues. In the final analysis, I am expecting a new president, who will be able to call the people together and we negotiate for our own good; not the situation that everybody becomes indolent and sharing poverty through the monthly allocation from the centre, that can no longer work.

There should be dialogue to address perceived issues —Soludo

No federation succeeds where one part is superior —Ayoade

When paracetamol, mushrooms can damage liver