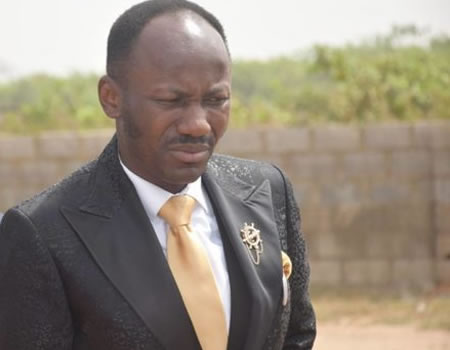 A group, known as the Buhari Support Organisation has risen in defense of Apostle Johnson Suleman over the alleged controversial comments made by the cleric, insisting that rights of persons to hold opinions should be respected.

This came as it urged Nigerians to continue with their support for President Muhammadu Buhari as he works to deliver dividends to the people.

It, however, urged Presidency to focus on finding solutions to the country’s challenges instead of engaging in arrests of persons it said sought to force government to do the right things.

Deputy Director of the group, Blessing Agbomhere, who stated this in Abuja, insisted that security agents should rather invite the religious leader to clarify any perceived inciting statements made by him instead of further violating his rights.

Agbomhere said the group took the position against the backdrop of the fact that any negative action taken by an enforcement agency under the executive would be viewed as coming from the President.

He equally advised that the president should not be drawn into what he described as battle of revenge.

He said, “As an organization, we have a duty to protect the image of our president and to give him all the necessary support to achieve his manifestoes for this country

“We believe that at this critical point of our nationhood, what we need now is not to disrupt the system but to give every necessary support to this administration to achieve its promises for Nigerians

“Some of the religious crises start on civil basis and along the line people start to attach religious sentiments to such issues. Sometimes selfish individuals make religion out of issues that have no religious background.

“He did not mention Islam, he mentioned herdsmen that have been causing havoc. It is not about religion but about societal issue and as Nigerians, we should learn how to approach issues as they are.”

2019: Enugu PDP begins mobilization of its members at ward level