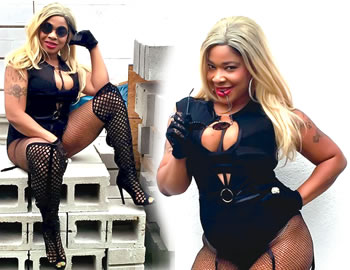 Engaging controversial Nollywood actress, Judith Opara Mazagwu, popularly known as Afrocandy, is always a delightful experience anytime the opportunity presents itself. The 45 year-old actress spoke with SEYI SOKOYA about life, renunion with husband, among other issues, in this  revealing interview.

How was it like joining citizens of United States to celebrate their Independence Day recently?

I was delighted to celebrate the day. It is one of the memorable events of the country.  Unknown to many, I am a US citizen and celebrating as one should not be strange. I love US because it is a country that gives one so many opportunities to become whatever one wants to be. It is a country with so much abundance, where even retarded people can become millionaires, where freedom of speech is practised. You can insult the president or the authorities and go free. It is also where one can walk into the hospital anytime and get treated without health insurance or being asked to deposits arms and legs to see doctors. The list goes on. I don’t think they have it better anywhere else in the world.

Is that why you took to the streets wearing a bikini reflecting the country’s flag?

I walked in the streets with it because I could do it in America anytime. Nobody will harass me unlike in Nigeria. That is one of the advantages; it is a civilized country. You can wear whatever you feel comfortable in. Meanwhile, it is too hot here. My flag was a bikini, so I had to flaunt and replicate it like a whole lot of other people as a way to make the celebration memorable.

It has been a while you visited Nigeria. Why?

I did not abandon Nigeria. The fact remains that I am a Nigerian, but relocated abroad. Now, US is my first home because that is where I live, while Nigeria is my second home because I only visit once in a while. You know home is where you make it and it doesn’t matter where you were born. About comparison, don’t even get me started, Nigeria is a blessed country with so many natural recourses, but the leaders do not want the country to see the light of the day. Are we to talk about the power system which is the worst problem of that country that has been there for decades and instead of getting better with evolution of the technology, it gets worst all because of some dubious individuals who are benefiting from the sales of generators, candles, kerosene, black market and so on. It saddens my heart whenever I see pictures and videos of people being beheaded or lynched in Nigeria and nobody is arrested. It is scary and gets worst everyday or are we to talk about the lack of protection where robbers will invade one’s house for hours without interruption. The rich are getting richer and the poor getting poorer. The masses are suffering everyday. It is crazy. I can’t continue with it.

How has it been living in the US?

It has been good. It comes with its struggles. I’m still trying to find my foot because I had a very rough beginning being a single mum with no support in raising two daughters. I’m working hard and I believe things will get better soon.

What was your experience like with the Nigerian marketers?

Marketers in Nigeria sold my movies but till today, they have not given me a dime. The main marketer I put in charge of the distribution would give series of stories and promised to pay my shares into my account. I called him the last time I was in Nigeria and he kept begging and promised to come and see me in my hotel, but he did not show up till I left. This is one of the reasons I have decided not do business with Nigerians again unless I have a good attorney to collect my money. It is not even only the marketers. The man I gave my production equipment to agreed to be paying into my account, I came back to Nigeria after three years and he paid only N50, 000 in three years. I collected the equipment and gave it to another person with 500,000 copies of my movies, clothes, shoes and a whole bunch of stuff that I shipped from the US, but since I got back to the US in 2014, I haven’t been able to reach them on the phone. Though, there are still good people there, but definitely not the poor ones.

Why didn’t you give these things to your relatives or trusted friends in Nigeria?

I committed my home and belongings to my relatives when I was coming to the USA only for them to turn my husband against me and told him to sell my house and everything inside while I was away. Now, I don’t have a house in Nigeria. This was why I stayed in hotels when I came to Nigeria the last time. So, why should I trust them again? The person I entrusted my things this time is supposed to be my  friend but maybe I was wrong again. My dear, it is a long story. I hate to talk or remember this because I have been hurt so much in my life that I lost hope in humanity. But I cannot do without dealing with human beings.

Could this be the reason you don’t come home often and even when you come, you don’t visit your relatives?

‘Once bitten is twice shy’ they say right. Don’t get me wrong, I’m not in bad terms with my family, at least I still have some of my brothers and sisters I talk with on the phone. I also missed my mum so much, but the fact is that I don’t feel safe going there because of what happened; extended families can be your worst enemies, so I’ll leave it at that.

Had there been any move for reconciliation with your husband?

We had reconciled since 2014, but we  are not living together yet. I’m still trying to get used to it. I’m not sure I can be the same woman again; I’m now AfroCandy, loving my single and porn life. It is going to take the whole world to make me a wife again, so I will say stay tuned.  If that ever happens, you will hear it. To me, we are more like good friends, though he wants me to be his wife again. I had so many plans before he came back, so it will be hard dropping everything and everyone just like that. It may never be possible because when a woman moves on, it is hard to make a turn, but they say never say never.

You have been silent about your music career?

Not really, I have four new tracks already and I am about to shoot the videos as well as put them out officially. So, I want my fans to watch out for that.

You shared some of your Nollywood works on social media lately. Does that mean you are missing the industry’s atmosphere and your colleagues?

Of course, I missed everything because that was where it all started for me. I still love Nollywood and will never forget. No matter how big I get, I cannot replace Nollywood with another industry. I still do Nollywood whenever I come to Nigeria. As a matter of fact, I have five movies that I have produced that are yet to be released and I’ve given the co-producers the money for editing and other things, but they keep telling stories and calling me for more money.

As a mother, how do you feel seeing you children coming of age?

It gives me great joy. What else could a mother ask for?

Would you encourage them if they develop passion for acting?

Don’t you think your children might follow your footsteps having seen you become successful in this aspect of acting?

I’m working hard to secure a better future for my kids, so they don’t need to do such because there won’t be any reason for that.

You have been having a tough time with some of your fans who react negatively to your posts online. Do you think this will ever end?

I do have tough time with some them and I don’t think it will ever end because I will always give them something to react to as long as I live. Afrocandy is just getting started. I have classified these set of people as my haters and I have put them in thier place.

You added another year last Tuesday, how did you feel?

I felt extremely glad and I thank God for the gift of life. I also thank my fans for their prayers and birthday wishes. It is a thing of joy for me that I am now 45, but I don’t think I wear the look.  On how I celebrated it. Honestly, I did not know what to do whether to travel or go to the strip club or throw a private party. I think the last option is what I’ll do, but that will be the end of July.

You shared same stage with Majek Fashek abroad recently, what was the experience like?

It was a planed show. Majek was in New York, but the promoter wanted to use me in New Jersey to reach his fans there for a fund raising. It was a great experience performing with Majek. Though, it was not my first time, I met him before that show and he is a very good friend. His character was quite different from what people described him as, especially the time he was going through difficult times. I also met him in Nigeria when I visited in 2014. I remembered he told me about his new management and assured me he would bounce back soon. He wanted me to travel with him to some African countries, but I was busy and trying to round up my projects as my returning to the US was approaching. I was glad to hear about his recovery last year; I saw his new shows and I  was very happy for him. Honestly, my friends and I over here planned to take him somewhere, but for some reasons it could not happen.

Why I wept at my daughter’s Nikkah —Pasuma

Yes, I want to win the Grammy —Slimcase