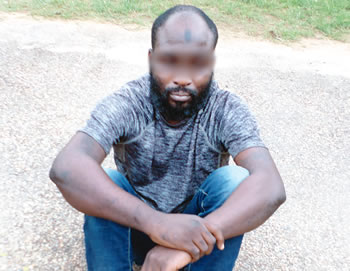 SAHEED Tijani a.k.a. Omo Olomo is a driver by profession. He even assumed the vice chairmanship position of a unit of the National Union of Road Transport Workers Union (NURTW) at Gbagi branch, Ibadan, Oyo State. But going by the allegation put up against him by one Abosede (surname withheld), it seems Omo Olomo is also skilled in driving ladies, albeit forcefully, to bed and alleged threat of driving knives into victims who try to resist him.

This was the revelation last Thursday at the police headquarters, Eleiyele, Ibadan, when 28-year-old Abosede narrated her experience in the hands of the driver. The lady, a married woman with two children, said she had lost her marriage as a result of the forceful sex Omo Olomo had with her after abducting her recently.

The state Commissioner of Police, Mr Leye Oyebade, had told Crime Reports that Omo Olomo was known for his notoriety in raping any lady that caught his fancy or that came across his way anytime he had sex urge.

The case was not different on April 4, 2016 when the suspect allegedly abducted Abosede at about 9:00p.m on her way home from work after threatening her with a knife, Oyebade stated.

He added that after subduing his victim, the suspect took her to a hotel along Sango-Eleiyele Road where he drugged her and raped her till daybreak. Since the incident occurred and was reported, Oyebade said that Omo Olomo and his accomplices went underground to evade arrest, prompting the Anti-Kidnapping Squad of the command to commence a manhunt for him.

He was said to have been arrested at a hideout about two months after the offence was committed.

According to the police commissioner, “investigation has revealed that until his arrest, Omo Olomo was a pain in the neck of innocent citizens, especially females, some of whom he had raped in the past. The suspect’s illicit sexual escapade was known to many people at Iwo Road axis but victims could not report due to stigmatisation and fear of attack by the suspect who was dreaded.”

His actions, Crime Reports learnt, had earned him suspension from the NURTW on many occasions.

Explaining how she became a victim to Crime Reports, Abosede said: “I didn’t know Omo Olomo before the incident. I was coming from work at about 8.45p.m. when I was stopped by the suspect and two other guys. He said he was not ready to hear anything from me, ordering me to mount a standby motorcycle and threatening that he could kill me and nothing would happen. I knelt down and start begging him but he drew a knife and threatened to stab me.

“I was scared stiff when I saw the knife, so I had to follow him to avoid being killed.  He took me to a hotel and brought food for me, but I refused to eat. From night till the following morning, he had vigorous sex with me under duress. He released me the following morning and I went to the woman I was working with to report the case. Thereafter, I went to a nearby police station to report the rape.”

The lady further stated: “I am a married woman with two children. The issue has caused problem between me and my husband and he has sent me out with the children.”

But the 35-year-old suspect denied raping the mother of two, saying that sexual intercourse they had was mutually agreed on.

According to Omo Olomo, “I didn’t force the lady. I had been wooing her for about three weeks before the sexual relationship. I used to go to the beer parlour where she was working as a sales girl.

“She later agreed to date me. That night, she came to me of her own volition and we went to the hotel. She even went ahead of me on a bike and I joined her later. I had only had sex with her twice before daybreak and before she left, I gave her N2,200, asking her to use N200 for transport and N2,000 for herself. I didn’t know that she was a married woman, but I insist that I did not rape her.”

The police commissioner said that the suspect would be arraigned in court at the conclusion of investigation.

He infected me with syphilis, made me lose 2 pregnancies

A year after previous arrest, suspect back in SARS cell over stolen cars