Latest News
By Olayinka Olukoya - Abeokuta On May 8, 2017 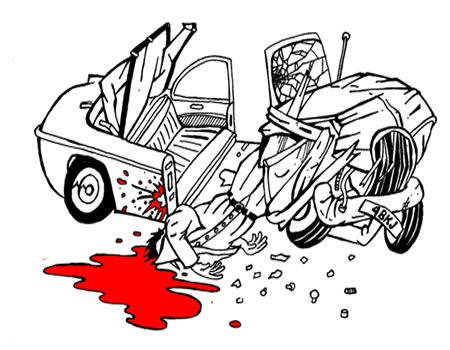 49-year-old, Tunde Olatunbosun, has confessed to the killing one truck motor boy, identified as Rasak, at a Car Wash, along Ewang Estate, in Abeokuta, the Ogun State capital, penultimate Saturday.

Olatunbosun, who claimed to be an automobile dealer was paraded alongside six others at the Police Headquarters, Eleweran, Abeokuta, on Monday, said he killed the victim by accident, while he was wrestling with him.

According to the State Police Commissioner, Ahmed Iliyasu, the suspect fled the scene of the incident having shot at the victim at close range which resulted to his death, and was said to have been arrested following a manhunt by men of the Federal Special Anti-Robbery Squad.

He was said to have been traced to Republic of Togo where he fled to and lured back to Nigeria by the detectives.

Items recovered from him were one AVAR pump action rifle with serial number 15-0083, 43 cartridges, a camouflage cap and short knickers.

Dressed in military camouflage, Olatunbosun, said the incident happened when he ordered the truck boy to move the tanker which according to him obstructed his vehicle.

He said that he brought out the rifle said to be licensed to deflate the tyres of the truck while the deceased wrest the gun from his grip before the unfortunate happened.

The father of three, however, denied fleeing to Togo after the incident, saying he was arrested at Camp Area of the city, when he wanted to report the incident at the Police Station and that the camouflage on him were not owned by him.

He claimed to be a member of the disbanded Merchant Navy and that over 20 vehicles number plates found on him were being used to transport vehicles from Cotonou to Nigeria to beat Customs operatives.

Yussuf Mustafa and Lekan Lukman were arrested for armed robbery, while one locally made single barrel cut-to-size gun and three live cartridges were recovered from them.