I have stomach ache any time I have sex with my wife, please separate us —Man

•‘He’s irresponsible, married 8 wives; ants attacked me after he poured soapy water on my bed’ 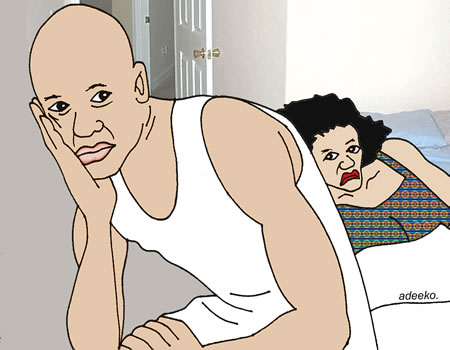 He also claimed that he always had stomach ache whenever he had sex with her. He stated that she never gave him rest of mind and had made their home uninhabitable for him.

Busari, therefore, entreated the court to rule that they both go their different ways so that he could spend his remaining days in peace.

Kasarat despite bringing forward accusations against her husband refused that the court stopped their marriage.

The defendant accused her husband of deceit. She told the court that Busari told her he had a wife when they met, but that on moving into his home, she realised he actually has five wives.

According to her, he married two others women a few months after she got married to him.

The defendant aside complaining of neglect by the plaintiff stated that he was diabolic and that he attempted to harm her.

Busari said: “My lord, I have never met a woman as troublesome as Kasarat. She has no other    vocation than to fight.

“Kasarat never listens to my counsel and loves to have her way always.

“She seeks every opportunity to fight me and other members of the family. She makes the home too hot for comfort and destroys my property. She is determined to ruin me which was one of the reasons I dragged her to court.

“She took to sleeping outside home shortly after we got married. I have warned her against this but she has failed to change.

“She doesn’t return home earlier than 10:00 pm. and when she’s back she will wake up our neighbours with her noise.

“I got fed up with her ways one particular night and refused to open the door for her.

“My lord, Kasarat went for a stick and broke the glass windows. She also used a cutlass to force the door open.

“Filled with rage, I came out and fought with her. Our neighbours hearing both of us shouting on top of our voices rushed to the scene. They tried to calm me down and mediated in our differences.

“At another time, we had an argument and she challenged me to a fight.  She took a stick and handed me another in the presence of every other member of the family.

“Kasarat lacks manners and behaves rudely to my family members and my parents in particular.

“He refused that my father stayed with us. She sent him packing. It was my father’s saddest day for he wept bitterly.

“My lord, I no longer trust my wife since she delights in sleeping out. I fear that he might kill me before my time.

“I’m saying this because I always have stomach ache any time I have sex with her. This has resulted in my disinterest in having sex with her any further.

“My lord, I’m through with Kasarat. I pray that you separate us today, “the plaintiff stated.

“Busari is deceitful in nature. He deceived me into marrying him. He lied to me that he had only one wife, but on getting to his house, I discovered he has five wives. I’m his sixth wife.

“His first wife told me he had sent his second, third and fourth wife packing. Not too long after this, he also threw my rival and her belongings out.

“He got married to two others a few months after I moved into his house, “the plaintiff explained.

She added that, “My husband is irresponsible. He abandoned me when I was pregnant and took ill. It was my mother who came to my aid. She took me to her place and watch over my health till I put to bed.

“My husband never showed up until I put to bed. He never made provision for my ante natal care nor gave me money to buy our baby’s need.”

“Busari’s vehicle was impounded and kept at the police station. He was asked to pay N500,000 which he didn’t have. I ran around to source for fund. I borrowed N250 from my sister and with additional sum from my friends the car was released to him. He failed to appreciate my efforts and still remained uncaring towards me.

“My lord, Busari is diabolic. His plan was to destroy me. He sprinkled soapy water on my bed and I was covered by ants when I slept on it,” the defendant told the court.

Too many gaps in my teeth

Bridal hairstyles for your big day