How Police paraded killers of farmer, petrol station owner, abductors of council chairman, others in Oyo 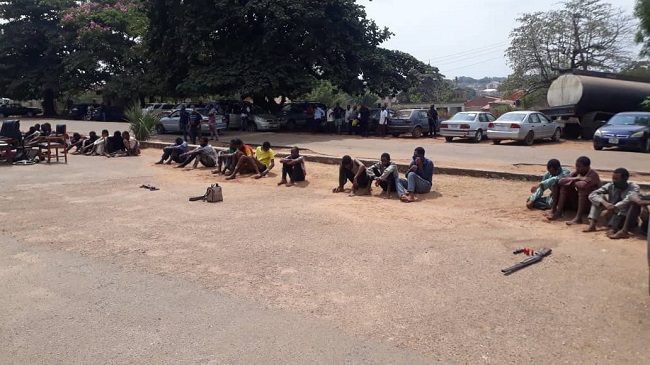 Operatives of the Oyo State Police Command have arrested the suspected killers of an Ibadan farmer, Mr Wole Agboola; a petrol station owner in Igbo-Ora at Ibarapa Zone, Alhaja Sherifat Adisa, as well as the abductors of the chairman of Igangan Local Council Development Area (LCDA), also in Ibarapa, Mr Adeleke Jacob Olayiwola, among others.

Speaking during the parade of the suspects at the police headquarters, Eleyele, Ibadan, on Wednesday, the state Commissioner of Police, Ngozi Onadeko, recalled that Honourable Olayiwola was kidnapped on Iganna-Ado Awaye Road, with a demand of N5.5 million as ransom.

The police boss said operatives of the command swung into action immediately the council boss was set free after the kidnappers had collected the ransom.

She said the operatives later intercepted the kidnappers and arrested them with AK-47 rifles, just as she added that they confessed to carrying out the abduction of the council chairman.

The suspects were identified as Babuga Mohammad (28), Rabiu Muhammadu (37), Usman Mohammed (30) and Aliyu Mohammed (26), while a double-barrel gun, a cut-to-size gun and four live cartridges were recovered from them.

The three suspects who participated in the abduction and subsequent murder of Ibadan farmer, Oluwole Agboola, at his farm at Adegbede village via Aba-Odo in Akinyele Local Government Area of the state, were also paraded.

Usman and Ahmadu, who were employed by the deceased, had allegedly conspired with the abductors to invade the victim’s farm and whisk him away on December 28, 2020.

She said a ransom of N1.65 million was collected from the family of the victim before the decomposing body of the farmer was found about two weeks after the abduction.

A police operative who spoke under anonymity said it had yet to be established why they killed the farmer despite collecting the ransom.

Also arrested were the suspects who invaded a petrol station at Igbo-Ora in Ibarapa axis on January 2, at about 7:55 p.m.

The police boss said apart from the owner of the station, Alhaja Serifat Adisa, who was pumped with bullets after the kidnappers dragged her into the bush after stopping her at the entrance of her petrol station.

Two other girls, Babatunde Omowumi and Toriola Kudirat, who were hit by stray bullets during the operation, also died.

Onadeko stated further that cash of N128,000 was recovered from the suspects.

Also among those paraded was a 56-year-old man Remi (surname withheld), who allegedly defiled a 14-year-old girl.

The police boss said the command received a complaint from the parents of the victim that sometime in May 2020, their daughter was sent on an errand at Bodija area of Ibadan, but was accosted by the suspect, who hypnotised her and gave her a drink.

The drink was said to have made her fall asleep, only for her to wake up and find herself on the bed of the suspect naked, with blood dripping from her private part.

The police boss said the victim, as a result of the act, is already 29 weeks pregnant.

In an interview with the Nigerian Tribune, the suspect, who claimed to be lawyer, confessed that he had carnal knowledge of the girl, just as he claimed it was consensual.

He also denied hypnotising the girl or giving her any drink, adding that everything that happened followed the girl’s consent.

He said he had already accepted the pregnancy and was willing to marry the girl.

Two suspected members of a robbery syndicate, Kazeem Yusuf and Okunola Mathew were also paraded, with an alleged invasion of the premises of one Olayemi (surname withheld) at Akobo area of Ibadan.

They had shot the son of the victim, while cash and several items were carted away.

One of the suspects, Yusuf, was arrested by Amotekun Corps, while the Commissioner of Police Monitoring Team arrested the second suspect after the transfer of the case.

Among items recovered from them were a locally-made gun, two live cartridges, a drilling machine and a sum of N50,000.

The police commissioner assured residents of the state of the preparedness of law enforcers in the state to rid it of criminal elements, in a bid to ensure that all would sleep with their two eyes closed.

She added that the command’s tactical teams comprising the Monitoring, Swift Response Squad, Skynet, Safer and Federal Highway patrols, Puff Adder and Police Mobile Force, had been set in motion to complement the existing security architecture throughout the state.

How I was arrested, shot 10 days after my wedding ― Kaduna CAN youth scribe