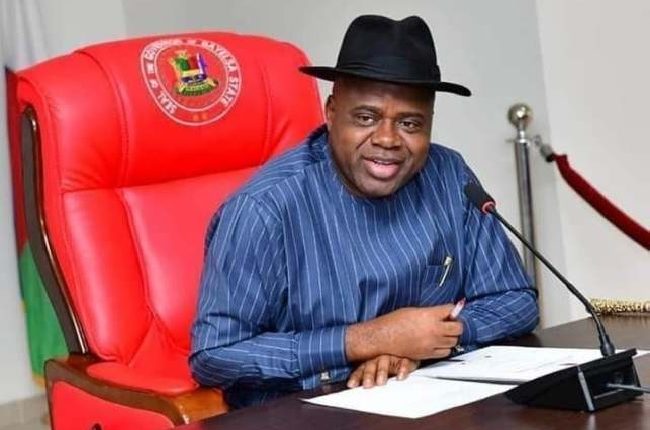 The government of Bayelsa State, Douye Diri, on Wednesday, met with a delegation from the American Embassy Political and Economic Affairs Bureau to discuss modalities to establish a security partnership that would ensure sustainable peace in the state.

Diri, who described the US as an asset to Bayelsa, noted that there was something unique about the synergy between his state and the country.

The governor stated this when a delegation from the American Embassy Political and Economic Affairs Bureau paid him a courtesy visit in government house, Yenagoa.

His words, “There is something unique between this state and the United States, which you also noted that there has been an existing relationship, collaboration and synergy between us.

“As a government that has taken over assets and liabilities, we see the United States more as an asset and we are prepared to continue the collaboration and synergy between our state and the US.

“So, I want to assure you that our Prosperity Government would also find prosperity in the partnership with your country.”

Responding to a comment on the recent killing of a military officer in Southern Ijaw, the governor said the incident was unfortunate but noted that he has directed a manhunt for the perpetrators to be brought to book.

Senator Diri emphasised that security was a top priority of his administration, which has succeeded in ensuring peace across the state.

“Security is one area that this government has taken very seriously and as we celebrate our first anniversary, we look back and we thump our chest that we have done very well in terms of peace and security in the state.

“Unfortunately, we had this incident recently. But we are looking out for the culprits of that dastardly act in order to bring them to book so this would not occur again in our state.

“Importantly, I want to restate our commitment and preparedness to partner, collaborate and synergise with the United States, believing that going forward there would be more of such meetings with you and the Ambassador.”

Speaking earlier, the US Embassy Political and Economic Chief, Mr Brandon Hudspeth, congratulated Diri on his first anniversary in office, which he said has witnessed sincerity of purpose in the development of the state.

Mr Hudspeth noted that the US mission enjoyed a robust relationship with previous administrations and wish to continue the partnership for the overall good of both parties.

He commended the governor for the priority placed on key projects that would open the doors to direct and indirect investments both from the US government and their private partners.

How Police paraded killers of farmer, petrol station owner, abductors of council chairman, others in Oyo