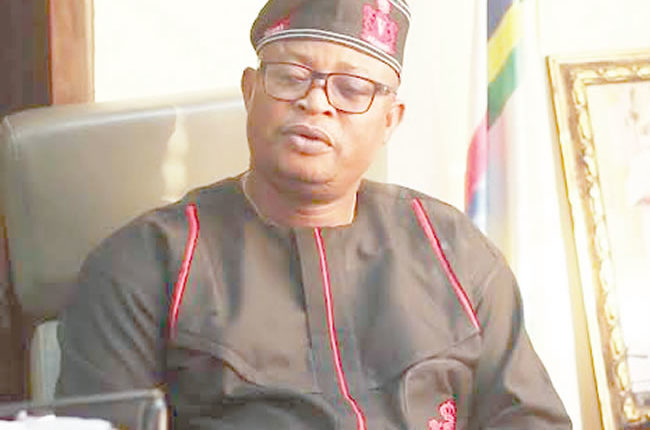 Why did your childhood friends name you ‘Copper Lee’?

You know we used to watch Chinese films then and so, everyone had taken their nicknames from characters in the film, but I couldn’t find a suitable one at that time. So, I went to buy a jean. Under the jean, there was an inscription “Copper Lee” and the jean was very beautiful, so much that everyone around me loved it. While looking at the jean, they saw the inscription on the label “Copper Lee” and that was how they started calling me “copper lee” (laughs). It was also written on the back of all the clothes I shared with my friends. However, in secondary school it was a different nickname entirely.

What was the nickname?

Initially I was looking for a nickname because I did not want “Copper Lee” anymore. Back then, students stole textbooks if one didn’t put his name on them (laughs). So, I was about writing my name on the edge of the book and I unconsciously put “Aka Olly” on it. So, that was how everyone started calling me “Aka Olly” (laughs). And that was what I later wrote on all my textbooks. Then, again, when I went for A levels, though I won’t say I am a handsome boy, ladies loved me and I was the most popular.

One thing then was that if one was very good in Mathematics, ladies would flock around. For one to have the best girl in the school then, one had to be brilliant. Anytime I came into the class, all the ladies would want me to peck them (laughs). I would start from the first seat to the last seat. So, they used to flock around me. One day, I was with about four or six ladies and that was the day Lawrence Anini was caught. So, they jokingly said “What! Victor is among the girls oo. So, he is Anini ooo” (laughs). Besides, the name “Victor” or “Segun” has helped me to conquer so many things in life.

One of the instances is the way and manner I became a university graduate. I can never forget this. I was offered admission to Lagos State University, but there was no money to pay for school fees. And how much were we talking about? It was roughly N480, but I did not have it. It was very, very tough. But God always makes a way through someone

I remember the name Shola Akinsehinwa. I didn’t know him but we were together in the class. So, we were having Chemistry 101 and there were so many students because it was a general class. A woman was our lecturer. One day she wrote an equation on the board, but I was not concentrating because my mind was not there, thinking about how to pay my school fees. Our matriculation day was fast approaching and if one did not pay before that day, one was no longer a student. I could not raise that money and the boy in question was with me. So, the lecturer was calling everyone to solve the equation on the board but no one could solve it. Soon, the woman noticed that I was lost in thought and she called me to solve the question. I can recall it was chemical balancing of equation. So, I just walked to the board and solved the equation. She did not expect me to get it; hence, she asked ‘are you sure it is correct?’ I said ‘yes’ and she asked everyone in the class which was filled to the brim to clap for me. After the class, this boy walked up to me and said ‘I am Shola Akinsehinwa’ and I replied ‘I am Victor’. So he said ‘My guy! Let us go and buy food because I am impressed and as from today, I am going to take you as my teacher.’ But I said I was not eating. He said ‘what’s wrong? Be happy.’ There was always an orderly following him because he was being trained by the Nigerian Army. He told me all this later. So, he asked what the problem was having noticed that I was always lost in thought. So, I told him I was worried about paying my school fees. So, he said ‘Ah! You have not paid?’ I said ‘Yes’; he was highly surprised. I said that was the more reason I declined to eat with him as I was sure that I was going to exit the school the following day. He asked me not to worry and that we should go and eat. When we got there, I met another student called Lukman who also commended my brilliance. Meanwhile, I never knew what was going on. Lukman too was a student but was the orderly to Shola Akinsehinwa, but I never knew until later. After eating, he said we should go and see the accountant.

When we got to the accountant, he told him that he wanted to withdraw his studentship because I have the brain but I didn’t have the money, but he had the money without the brain. He said he only wanted to be a soldier thus the accountant should swap his fees and give to me.

Yes. To my amazement, the accountant asked ‘is that what you want?’ Shola said ‘Yes’. So, they collected the receipt from him and issued another one for me, in my name. So, that was how I was able to pay. But, till today, I have not seen Shola Akinseinde. I am still looking for him even up till now.

So, he genuinely withdrew his studentship for you?

Yes. The funny thing was that another fee was paid for him to come back, but he did not. It was after he did so that he revealed himself to me and said ‘I am the son of former Head of State, General Murtala Muhammed’s orderly that was killed.’ The young man never saw his father because he was killed before his birth. So, I looked at him and started crying.

How would you describe this event?

Hmmm. It was divine intervention. God often makes a way where there is no way. I met him that day and the miracle happened that day. Though I had been strongly attached to my studies, but considering the fact that I had nothing and God sent someone, I gave my all. Looking at what I passed through, there was need for me to pay more attention to my studies.

What about your parents?

I was not with them at this time, though I grew up with them. My mum was very humane while my dad was a disciplinarian because he was a teacher. But, I was living with my uncle before I left for my personal accommodation. I stayed with him while I was in secondary school. But, I left after my secondary school education. Regarding my uncle, one would think he was hostile, but not so. It was all about training for the future.  I went through a lot of training and that is what made us what we are today.

What were the challenges you faced living with your uncle?

(Laughs). I won’t tell you those aspects because if not for him I won’t be where I am today. The experiences made me who I am today. My uncle travelled abroad and came back. When he got back, he wanted me to be with him. So, we were living in Badagry GRA where magistrates and other influential persons lived. Looking back, we bless the Lord for who we are now and for having a good wife.

God arranged it. I did not plan for it. We just met through my cousin. Something told me ‘this could be your wife.’ So, I told her ‘I would love to meet you later but that would be, if God destined our meeting again.’ That was what I said that time and it was around 9:30 pm and we both dispersed. So, we saw again and this is where we are now.

Your soft spots for her?

I don’t have a reason to like one or two things about her. I just love her wholesomely and by the time we started, I asked myself: ‘can I condone her shortcomings?’ If yes, at what percentage? Since I made up my mind to condone her 70 percent, I went into it.

What are your vices she usually complains about?

My wife understands me. Initially, it could be difficult to understand who I am if one is not patient. She knows I am not the outgoing type. She knows once I am out, I will be back home by 8 or 9pm. I am very homely.

As a handsome lawmaker, how do you handle ladies’ advances?

(Laughs) You have to separate your work from three things – your work in the House of Assembly, your representation of the people, simply because you are a role model. Yes, a lot of ladies would make passes at you, but you have to be very careful not to fall for the antics of women.

What are the misperceptions about Mr Victor Akande?

Who will stop the slide?

How I survived among my classmates like Okowa, Obaseki, despite being the smallest…