How I will transform Osun State — Ogunbiyi

Interview
By Sulaimon Olanrewaju On Jun 17, 2022 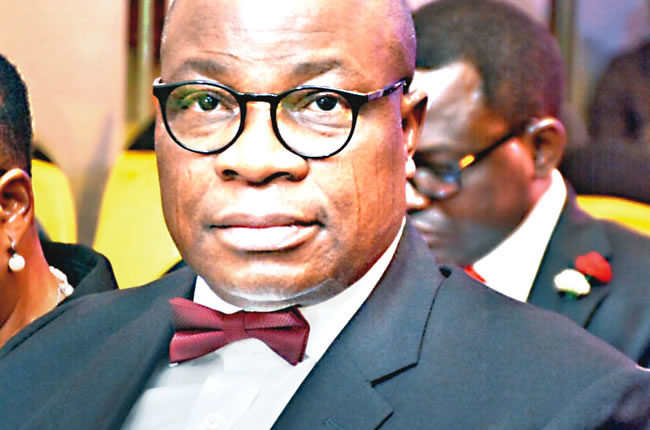 Dr Akin Ogunbiyi, founding Managing Director of Mutual Benefits Assurance Plc, is the Accord Party candidate in the state’s governorship election slated for July 16. In this interaction with Sulaimon Olanrewaju, the serial entrepreneur says his antecedents stand him in good stead to win the election.

Dr Akin Ogunbiyi, the Accord Party governorship candidate in the July 16, 2022 governorship election, is driven by the passion to see Osun State developed and the lot of its people improved. According to him that is his essence in politics.

He said, “I have no other mission in politics other than to help our state optimize its potentials and make it a model. That is why this contest is important to me and crucial for the people of the state. The state is so blessed that the people should not be wallowing in poverty. But poverty is the reality of many people in the state. In most places you go, you see hopelessness and helplessness. The missing link is the right leadership, the leadership that will transform the potential of the state to benefits for everyone, the leadership that would turn resources into results. That is where I come in, with my God-given talents, I will make the state productive and prosperous.”

He added that with the incumbent governor having been in government for almost 12 years, first as Chief of Staff to the immediate past governor, Rauf Aregbesola, he has reached the end of his tether and should be allowed to take a rest.

“What more can the governor do than he has done? It is so clear that he has plateaued. Osun needs an alternative to Oyesola. I am the credible alternative. I am the choice that Osun needs to begin its journey to greatness. The state should not miss this opportunity,” the business icon said.

The governorship hopeful said, being a successful businessman who had built many businesses from scratch, he had the capacity to turn around the fortune of the state, scale up development, reduce poverty and create employment opportunities for the state’s teeming youths.

He added, “Transforming Osun State is not difficult but it requires thinking out of the box, tweaking with a few things in the system and doing the right things. Once all of these are in place, the state’s journey to greatness will commence.”

Shedding light on his plan to transform the state, Ogunbiyi said he had prepared a blueprint of his plans for the state, adding that the blueprint has six major policies as its fulcrum. “The first thing I will ensure is improving our education system. But for education where would I have been? Education helped me to identify opportunities which I seized to get to where I am. The system gave me opportunity through education. There are millions of people like me who can add value to the state but the issue is the kind of education we have. I will ensure that every child of school age in Osun State goes to school.

“According to the National Bureau of Statistics (NBS), the number of out of school children is on the rise in Osun State. This is not acceptable. Under my watch, every child will go to school. We must give every child in the state an opportunity to make something meaningful out of life,” he stressed.

The second thing he would do differently is to ensure that the allocation to local government areas get to them.

He explained that this is important because the effect of the state government’s starving the local councils of their due allocation is grand scale underdevelopment of the rural areas, which has resulted in unprecedented poverty at the grassroots.

He said: “If the state government allows local government areas access to their funds, it means that the local governments will be able to embark on projects and programmes in their areas. When a local government gives out jobs to contractors and suppliers, the economy of the area is energised, commercial activities will improve, employment opportunities will be created and life will be more meaningful to the people at that level.

“As we speak, roads in rural areas are in deplorable state because the local governments have been muzzled; they cannot do anything apart from paying salaries. By giving the rural communities good roads, farmers would be able to get their produce to the market fast and would be able to get good value for their efforts.

“Ordinarily, one would think that there is no correlation between allowing local government councils unfettered access to their allocations and prosperity of farmers but that is not true. The life of every rural dweller is negatively impacted as a result of the state government cornering the money meant for local governments. I am going to change all of that when I become governor. I will see to it that local government’s money is released to them on time. I will also ensure that the people’s will is reflected through election. Never again will there be imposition of candidates on the people at the grassroots. There will be proper elections and the votes of the people will count.

“However, to guard against abuse, we shall put in place a process of monitoring projects embarked upon by local government areas.”

Another thing Ogunbiyi promised to do is the prompt and full payment of salaries to civil servants as well as gratuities and pensions to pensioners.

He said, “I am aware that civil servants are going through serious difficulties because of incomplete payment of salaries. We will regularize salary payment. Those who are due for promotion would be promoted and we will pay all outstanding gratuities to our pensioners within six months of taking over.”

Ogunbiyi noted that when a government prioritizes salary payment, it gingers the economy.

He said, “When civil servants get paid, they don’t keep the money idle in their accounts. They make purchases and embark on projects. That way, the market women get to make money, private schools make their own money as parents are able to pay tuition fees, landlords get paid their rent, the artisans get to make money and everybody is okay. But when government fails to pay salaries, the state is paralysed and poverty escalates.

“That is why we have artisans abandoning their trades to become commercial motorcycle riders. That is why we have grand scale unemployment at the grass roots. How can a state build its economy around okada business? That is why we have more people sliding into extreme poverty. If I am elected governor, I am going to change all of that by prioritizing salary payment,” he said.

The Accord Party candidate also said the importance of Micro, Small and Medium Enterprises (MSMEs) cannot be over-emphasised “because they are the engine of growth. If we really want to address the issue of unemployment, we have to help MSMEs thrive. Our plan is to empower about one million MSMEs within the first one year of our administration. We intend to do this by identifying and registering MSMEs in all the local government areas of the state, develop their capacity to produce to international standards, help them to access funds depending on the type of business, and get experts to guide them with the marketing of their products by connecting them with end users.

“The essence of all these is to address the major issues confronting small businesses. Many of them lack the know-how, access to funding and marketing. I am a guru of micromarketing and we are going to change all of that. If we are able to help them with these, their capacity will be enhanced and they will be able to employ others. If we are able to empower one million MSMEs and each of them is able to employ five people, then we will have created five million employment opportunities without the government really employing anybody and without swelling the state wage bill.”

“We will build new roads in all the major towns and cities in the state, we will expand existing roads to prepare the state for astronomical economic development, and we shall improve on our transportation system. Good infrastructure always attracts great businesses because infrastructure facilitates business success. So, we shall develop our infrastructure to make our state attractive to businesses. But we shall ensure that every senatorial district gets its due. I shall be fair and just to all. I shall not develop any part of the state at the detriment of others.

“Our administration will partner with independent power providers with a view to achieving 24-hour power supply in designated areas of the state. This is also intended to attract investments to the state. This is important because if we are to overcome the challenge of unemployment, we have to partner with the private sector and provide an enabling environment for them to thrive.”

On his plan to industrialise the state, Ogunbiyi said his administration would deliberately court manufacturing companies to establish their presence in the state. “If I am elected Osun State governor, we will make the most of the Living Spring Free Zone. It was established in 2006 but since then, it has not been put to any good use because the state is always looking up to Abuja for monthly allocation. There will be a deliberate plan of the government to develop the free zone with the necessary infrastructure that would make the area irresistible to business entities. We shall develop this area so well that businesses would feel at home there. My intention is to make Osun State a model by providing creative leadership that would result in all round transformation. It is possible. A better and greater Osun State is possible and we shall deliver it, when elected,” he assured.

In spite of the huge investment in the water sector by the government and international organisations, water scarcity has grown to become a perennial nightmare for residents of Abeokuta, the Ogun State capital. This report x-rays the lives and experiences of residents in getting clean, potable and affordable water amidst the surge of COVID-19 cases in the state…How I will transform How I will transform

The Lagos-Ibadan railway was inaugurated recently for a full paid operation by the Nigerian Railway Corporation after about a year of free test-run. Our reporter joined the train to and fro Lagos from Ibadan and tells his experience in this report…How I will transform  How I will transform

Comedy can be a gift or skill, master it to be unique — Larry J

My agenda for Osun —Adeleke