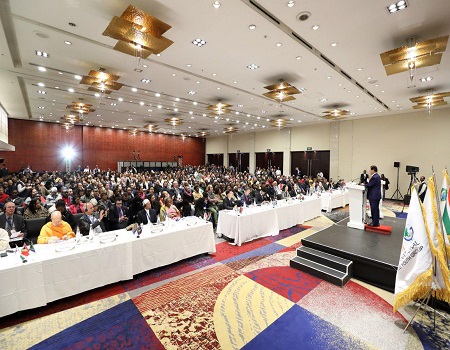 FOR long, African leaders and people have searched for various instruments that promote democracy and peace to achieve Conflict-free Africa. This August, these enduring efforts have made a breakthrough with the inter-regional collaboration and peace-building initiatives led by an UN-affiliated NGO working for world peace.

On August 10th and 13th, “African Leaders of Peace Summit 2018” with the slogan of “Achieving Peace in Our Lifetime” was held respectively in Johannesburg and Cape Town, South Africa.

The organizers of this event, African Leaders of Peace Summit Organising Committee and Heavenly Culture, World Peace, Restoration of Light (HWPL), explained the purpose of the summit as to call for African leaders’ concrete roles in sustainable peace and security in Africa and to present a plan for the implementation of the “African Union’s Agenda 2063”.

HWPL, which has made harmonious collaboration with the governmental organizations of Africa, is an NGO registered under the UN Economic and Social Council (UN ECOSOC) that spearheads a campaign in 170 countries to implement an international law for peace. In Africa, HWPL has carried out various peace activities such as peace walks and cultural campaigns to increase public awareness of peace in tandem with civil society organizations.

On March 14, 2016, HWPL announced the Declaration of Peace and cessation of War (DPCW), to strengthen a solidarity of peace through a comprehensive cooperation of all sectors of society and to establish legally binding international law necessary for peace-building.

The DPCW with 10 articles and 38 clauses, drafted by international law experts, includes provisions to avoid war-related actions and achieve peace, including respect on international law, ethnic/religious harmony, and a culture of peace.

This has formed the template upon which HWPL, led by its Chairman, Man Hee Lee, a veteran of the Korean war, navigating the world to ensure that peace return to the threshold of humanity.

The attendees of this year’s peace-building conference in Africa including dignitaries, religious leaders, educators, civil society, youth, and media across Africa brought out the principles of the Declaration of Peace and Cessation of War (DPCW) as a solution to conflicts between religions and ethnicities as well as a part of solving the social issues such as discrimination and corruption.

Mozambique President of National Assembly, Veronica Nataniel Macamo, spoke in favour of the implementation of the declaration, “I believe that peace can be achieved through the DPCW and hope that all nations will be able to attain peace not only for our future generations but in our current generation as well.”

In the summit held in Johannesburg on August 10th, two countries, Seychelles, and eSwatini proclaimed their official support for the DPCW that embraces holistic principles of the international law such as peaceful conflict resolution, friendly relations between states, freedom of religion, and a culture of peace by signing the national solidarity statement.

The City Councilor of Cape Town, Mzwakhe Nqavashe, who participated in the summit of Cape Town, stated that the progress of peacebuilding project that has been motivated by the DPCW says unprecedented peace will soon envelop the continent.

She said, “Through activities like environmental clean-up and peace walk in relation with the article 10 of the DPCW, ‘Spreading a Culture of Peace’, dangerous regions threatened by crime were converted to peace parks, and the peace campaign has led to a steep drop in crime rates.”

In Addis Ababa, Ethiopia, Political and social representatives in Africa and Middle East gathered to discuss international cooperation for peacebuilding through a series of events including the “Ethiopia Peace Conference” on August 15 with education experts and civil society, the “Addis Ababa Summit” with political leaders from Africa and the Middle East and the “Open Dialogue with Religious Leaders” on August 16.

On August 15, government, educator and youth sought a way of reconciliation for peace at the ‘Ethiopia Peace Conference’ held in the United Nations Economic Commission for Africa (UN ECA) located in Addis Ababa, Ethiopia. At this event attended by former President of Ethiopia Negasso Gidada, representatives of 10 universities, state minister of education and 700 university students, the DPCW Advocacy Signing Ceremony was held to invent cooperative peacebuilding with the participation of people from every field of society.

The Chairman of the Heavenly Culture, World Peace, Restoration of Light(HWPL), Man Hee Lee, who visited Ethiopia following a peace tour to the United Nations in May, advised that African Presidents should be carried along in the implementation of DPCW.

He said “We should also write a letter to the president to support the Implementation of international laws for the cessation of war. It says that the people have all the power of the state. That’s why the president has no reason to refuse what the people want.” And the Chairman presented a role of civil society for peace and urged them to join peace activities.

In the ‘Open Dialogue with Religious Leaders’ held at the Ethiopian Evangelical Mekane Yesus Church, Mekanissa branch, where religious leaders spoke on how to find answers to peace from the bible. It was agreed that “No religion teaches fighting or killing each other. In order to resolve the religious conflicts, we all must know the Scriptures, and I hope that we can show first from the Ethiopian Protestant Church by Open Dialogue with Religious Leaders.”

In various speeches from several of the clergymen that attended, the deputy of peacebuilding department in Inter-religious Council of Ethiopia, Adane Dechassa opened the business of the day with his congratulatory address which set the tone in motion for the business of the day. This was followed by video presentation on peace in the world by HWPL media team. This video aroused the mind of participant on the goal of HWPL’s vision for peace across all sections.

Thereafter, Pastor of Ethiopian Full Gospel Believers Church, Melkie Yeshanew came on board to speak on “New Covenant, Lamp and oil”, just as Pastor of Hilwot Berhan Church and Director of Leadstar Theological College; Senbeto Bashe and Fikru Assefa, respectively mounted the podium in that order for their inspiring speeches.

To cap the success and commitment of the religious section, Pastor of Hilwot Berhan Church, Senbeto Bashe and recited the pledge on open dialogue for the commitment ceremony while head of Development and communications in Ethiopian Graduate School, Addis Amado recited the letter of denunciation of Christian Council of Korea while a pledge and letter to this effect was later submitted on the occasion.

In addition, about 50 pastors who participated in a pre-seminar and signed the Pledge for the Regular Operation of Open Dialogue in Ethiopia had time to deliver it to Mr. Lee, Chairman of HWPL. They signed that religious leaders should lead in creating a peaceful environment through holding a regular event for different religious groups starting December this year.

At the “Addis Ababa Summit” held in Medium CR, African Union Commission and co-hosted by international organizations including, Inter-African Committee on Traditional Practices(IAC), International Law Association(ILA) Egyptian Branch and HWPL, politicians from Africa and the Middle East discussed the need for the international law for peace to bring out stability in the regions and promote peace-related projects at each continental level.

The Speaker of the Parliament of Uganda, RT. Honourable Rebecca A. Kadaga, who spoke on “the importance of the international Law for National Status and Peace”, stressed the role of political leaders for realization of peace. She puts it that “DPCW draws upon the principles of peace expressed through the ages through which the people of the world expressed their desire for global peace and called upon world leaders to put aside their vested interests that stand in the way of world peace and harmony. ”

Also, Advisor, International Affairs of Royal Court of the Kingdom of Bahrain, Dr Faysal Abdel Gadir Mohamed presented an address on “responsibilities and roles of the leaders from Africa and the Middle East for peace.”

With this, prominent leaders had the time to sign on the Signature in Support of the Declaration of Peace and Cessation of War(DPCW).

Before these events in Ethiopia, official declaration of support for the DPCW by heads of African countries such as Eswatini andRepublic of Seychelles was followed.

Following the African Leaders of Peace Summit in South Africa and Ethiopia in August, the “2018 Addis Ababa Summit” was held in order to reaffirm the collaborative efforts among the regions in Africa to establish a legal foundation for the sustainable peace.

The discussion was backed by the support for the DPCW which aims to cease any armed conflicts and educate the spirit of peace through peace education and culture.

Political leaders from Africa and the Middle East who participated signed for supporting the enactment of the DPCW at both national and international level. In his address, RT. Hon. Rebecca A. Kadaga, Speaker of the Parliament of Uganda, stressed that the political leaders should listen to the desire of their people to the world of peace and the voice of urging for the DPCW which has the principles of world peace and harmony.