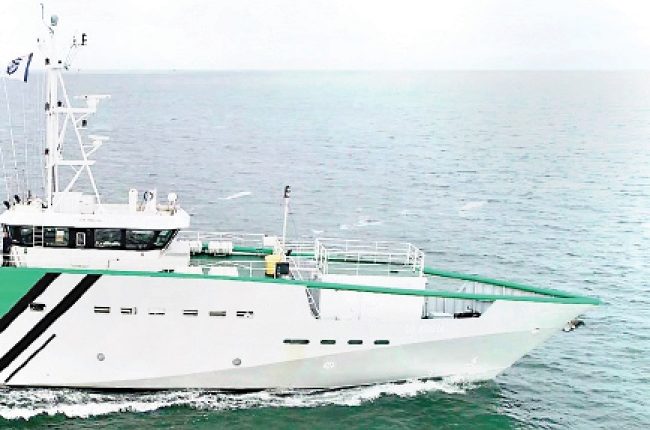 President Muhammadu Buhari will today, in Lagos perform the official launch of the assets under the Integrated National Security and Waterways Protection Infrastructure, also known as the Deep Blue Project. In this report, TOLA ADENUBI examines major issues that could hound the success of the project in the Gulf of Guinea (GoG).

THE Deep Blue project, since its conceptualization, was meant to secure Nigerian waters up to the Gulf of Guinea. The Project has three categories of platforms to tackle maritime security on land, sea, and air. The land assets include the Command, Control, Communication, Computer, and Intelligence Centre (C4i) for intelligence gathering and data collection; 16 armoured vehicles for coastal patrol; and 600 specially trained troops for interdiction, known as Maritime Security Unit. The sea assets include two Special Mission Vessels and 17 Fast Interceptor Boats. The air assets comprise two Special Mission Aircraft for surveillance of the country’s Exclusive Economic Zone (EEZ); three Special Mission Helicopters for search and rescue operations; and four Unmanned Aerial Vehicles.

With the expected commissioning of the project today by President Muhammadu Buhari, incessant attacks on vessels plying the West African coastline are expected to subside in the coming weeks and months. However, issues that could rear their ugly head as the Deep Blue project implementation unfolds look unresolved.

Despite the fact that the Deep Blue project was initiated by the Federal Ministry of Transportation and is being implemented by the Nigerian Maritime Administration and Safety Agency (NIMASA), the platforms are expected to be manned by officials of the Nigerian Navy, who incidentally had to see their own initiative, the OMSL Secure Anchorage Area (SAA) get dismantled in-order to pave way for the Deep Blue project. Despite the termination of the SAA initiative by Mr. President in the first quarter of 2021, sources very close to the Navy have revealed that the way and manner the Deep Blue was foisted on the Naval hierarchy is still leaving a bitter taste in the mouths of some of the forces leadership.

According to a source close to the Nigerian Navy, “There are issues that are being bottled up all because everybody wants to see how far the Deep Blue initiative will go. Some of the leadership of the Nigerian Navy are not too comfortable with the fact that the Deep Blue project was foisted on them. They were never part of the initiative from inception. It was conceptualized during the tenure of the former NIMASA Director General, Dakuku Peterside. From inception, it was a Federal Ministry of Transportation arrangement. The Ministry of Defence, through the Nigerian Navy had the SAA arrangement in place then.

“Maybe if the Navy had been part of the Deep Blue conceptualization, planning and equipment purchase, maybe there won’t have been issues in this regard. Many of the equipment or assets that are set to be deployed for the Deep Blue were procured by the Federal Ministry of Transportation through NIMASA and its partners without the participation of the Naval leadership, past or present. So, when Mr. President terminated the Naval arrangement (SAA) in the early periods of this year, the Navy had no other choice than to key into the Deep Blue project. So, you see there are issues. Some of those Navy guys are just waiting for the project to hit the rock. Confidence in the project is not as high as would be expected because they don’t see it as their own. They see it as something that was foisted on them. The assets, which everybody expects the Navy to man, were not procured by them (Navy).

“Aside this, some of the Naval guys expected the Deep Blue project to run side by side with the SAA. Many didn’t envisage that the Federal Ministry of Transportation would mount pressure on the Presidency to dismantle the SAA. For some of these Naval guys, the SAA was a working project that needed to be improved upon, not dismantled. That it was dismantled and a new arrangement foisted on them, I pray issues don’t come up on effective maintenance of the assets of this new project. Remember that those assets will be manned by the Navy, not NIMASA personnel.”

Another issue that may creep in as the Deep Blue project gets implemented is associated with inability to harmonise all the silos of surveillance platforms in the nation’s maritime sector. Buttressing this point, a maritime expert and former Presidential aide on maritime services, Mr. Leke Oyewole explained that if the Deep Blue project must work, different surveillance systems of different agencies of government must be harmonized.

“If the Deep Blue project is going to rely only on its C4i system, I fear for its overall success because of the size of the Gulf of Guinea. There needs to be harmonization of surveillance systems because attacks occur in minutes on the high sea, and responses need to be swift. The GoG is massive, stretching across the coastline of all the West African countries. If there is an attack off the waters of Ghana or Togo, the Deep Blue should be able to quickly intervene and arrest the situation. Ability to move to crime scene in record time will be key.

“So much has been said of the Deep Blue project, but I fear for information sharing among various agencies of government with different surveillance system. Many of these agencies currently view the Deep Blue project as a NIMASA thing, and this won’t help our fight against maritime insecurity. Until we start treating maritime crimes as a national issue and not just a NIMASA headache, we might struggle to get to where we want to be as regards to safety of our waters.“

The Deep Blue Project is the first integrated maritime security strategy in West and Central Africa with the aim of tackling the incidences of piracy, sea robbery, and other crimes at sea.

Preparatory to the launch, the Maritime Security Unit (MSU) of the Deep Blue Project, comprising personnel from the Nigerian Navy, Nigerian Army, Nigerian Air Force, Nigeria Police, and Department of State Services conducted simulation exercises for the event on the land, air, and sea assets of the Project to confirm their readiness for full deployment.

How Air Peace is giving priority to workers value