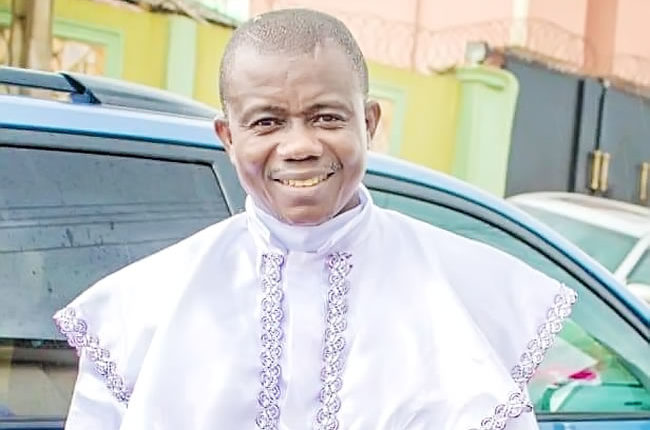 Prophet Michael Olusoji Fabiyi is the shepherd-in-charge of the Celestial Church of Christ, Okiki Imoleayo Cathedral, Ikorodu, Lagos State. In this interview by SEYI SOKOYA, he speaks on why the Church should not be weary over the effect of the coronavirus pandemic, among other issues.

The online version of the Church has become major channel to virtually all churches to always engage their followers as a result of the coronavirus pandemic. To what extent do you think online will help the growth of faith and evangelism?

I feel coronavirus has brought about a new development in the vineyard which everyone must get adapted to, especially those that are yet to adopt the online as a tool to propagate the gospel. It makes things much easier, though many believe it affects the income of the Church, the Bible says “seek ye first thy kingdom of God and every other thing shall follow”. This has been our own belief and we have been acting according to the word of God, even before coronavirus surfaced.

We should always be mindful that the structure of the Church is not just the building. Nobody can lock down the Church. We are the temple of the Lord; so, the medium should not be a big issue. Instead, our hearts and service to God is paramount.

What greatest lesson do you think Christendom has learnt from this pandemic?

Firstly, I discovered that many never believed that the quantum of damage associated with the virus would be huge and enormous with disaster still not averted. It started gradually from the city of Wuhan in China and spread globally. What people failed to take seriously are the foretold predictions and prophecies by great clerics about the disaster. I believe a lot of people and leaders of the nation will now take some clerics seriously with their predictions and God’s warning. I trust that people will learn so much about this. Christianity will as a result of this incident do the needful and align to God’s directive.

So, what should people expect after this whole experience?

It is not all over yet. The deadly virus according to regulatory institutions is still very much around this is why all and sundry are still being advised to always take precautionary measures. We must not relax on this fight. I see greater challenge than the coronavirus pandemic looming, but we will not relent in our prayers to overcome all challenges that come our way. This year is full of great inflations. Things will take a wrong dimension in the hands of the government, but God will manifest Himself.

We must all understand that prophecies are guides against impending dangers which need urgent attention through prayers and supplication, so, we must always adhere to God’s instructions. An epidemic which has gone into extinction will come again in a more deadly dimension, but God will take pre-eminent control. War will erupt in three countries. Fire disaster and wailing across these countries while multiple losses of lives and properties will occur.

In the vineyard, the secret and source of power and wealth of many great clerics will be exposed. The secrets of some clerics that lied to acquire wealth and riches, including those with fake miracles, will be exposed while two powerful clerics will also died mysteriously before the end of the year.

I am not speaking blasphemy or giving fake prophecies; these are revelations from God and this is not the first time I am hearing from Him. The word of God will surely come to pass. The only way to avert all these is through prayers and obedience to the word of God. We need to pray hard to God for the forgiveness of our sins for God to heal our land.

How is life now for you since you came into the vineyard?

Life was tough and so challenging, but I never lose hope of having a better life after. I was focused and prayerful despite all my challenges. I was a carpenter and a houseboy.

How has the experience been as a cleric?

So challenging. I encountered a mysterious incident at the beginning of my apostolic journey, but I did not allow the incident to dampen my morale in serving God; rather it reshaped me for great exploits. I became blind at the early stage of the ministry due to snake attack in the church. At a particular time I had stroke, but I remained resolute in serving God.

How was it easy for you to regain your sight after the incident?

I give all the glory to God for the great turnaround. I knew it was an attack, but God saw me through. I regained my sight through the grace of God. The attack was not ordinary; it came from the pit of hell, but I am a man of destiny. God miraculously saved me, perhaps, that would have been the end of the ministry. I faced a lot of tribulations and persecutions, but above all, God protected me. The greatest decision I have ever made in the ministry was that I made a covenant with God that I will never stop doing His will and as well as giving my best to populate His kingdom irrespective of any situation I find myself. However, I have enjoyed grace and God has surrounded me with good people. Through divine grace, our ministry has grown in leaps and bounds.

How was it like not actively discharging your duties as a cleric in the last two months?

I didn’t go on holiday. I was up and doing and engaging people as well as interceding in prayer for people and the nation at large. Also, we are doing online worship with great testimonies. God is the same and He changes not. Our duty is to preach the gospel, which we are doing perfectly well online and testimonies are there for people to see.

Now that ban has been lifted on religious gathering, what will change in the mode it worship in your church with the directives of the government?

I don’t think the change will be much because church is now at various homes. Many people are now pastors-in-charge of their families. Come to think of it, it is a good development for Christendom.

Are you not bothered that church attendance might reduce as people may not really return to church as a result of the damage of COVID-19?

Not in all, as I said earlier, church is in the heart and we all have to take note of that. Physical attendance in the church will not determine one’s salvation, though it is a fact that people are used to fellowshipping together. What if coronavius is more prominent, are we going to stop serving God? Are we going to stop praying? We need to be realistic and put sentiments apart. God is unpredictable and we must always tune to His direction.

What is your advice to the government?

I urge them to always do the needful. Every position is temporary. They should learn to impact the lives of the citizenry.