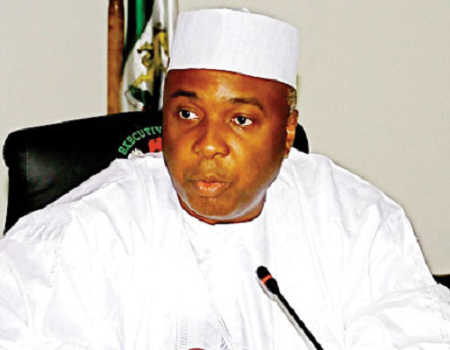 Immediate past President of the Senate Olusola Saraki on Friday enjoined party leaders and all stakeholders who played one role or the other in wooing Obaseki to the Peoples Democratic Party to thread the path of honour and stick to agreements.

Senator Saraki who commended the efforts of all parties to the deal that facilitated the defection of the Edo State Governor Obaseki into the party congratulated Obaseki for the decision he said was a good step in the right direction.

In a statement issued in Abuja, Saraki noted that the bigger commendation and appreciation should go to the leaders of the Edo State Chapter of the Peoples Democratic Party (PDP) at the various levels for the sense of sacrifice, patriotism and devotion to the progress of the party demonstrated by them in the process of welcoming Obaseki into its fold.

The statement signed by the spokesman to the immediate past Deputy President of the Senate, Abubakar Bukola Saraki reads: “I also thank Obaseki’s colleagues, the PDP Governors, for their role and for ensuring that while bringing him into the party, they carried along with the local chapter and refrain from just unilaterally taking decisions without the input of the leaders of the party in Edo State.

“The process our Governors adopted in working with the local chapter to bring in the Governor is a better approach than the system in many of the other parties where the National Working Committee (NWC) would simply just give him a membership card.

“That is why my appeal will, at this point, go to all of us, the leaders and stakeholders, who gave assurances that agreement will be honoured, we need to ensure that the NWC of our party plays its own supervisory role by making sure that those agreements entered into by the Governor and the local chapter should be kept, particularly since I am very sure they are all lawful and in the interest of peace and development of the state. That is the only way to keep our integrity intact.

Senator Saraki used the opportunity to take a swipe on the suspended Chairman of the All Progressives Party, Adams Oshiomhole.

He said while Oshiomhole boasted of retiring other politicians while posturing as a Democrat when his true credentials are autocratic.

“At this point, it will be odd if I fail to comment on the situation that led to the change of party by Governor Obaseki. While I have kept my cool and ignored all the verbal attacks directed at me by the suspended chairman of the All Progressives Congress (APC), Mr Adams Oshiomhole, I have always known that a day like this would come when his masquerade will dance naked in the market.

“The truth is always constant and no matter how far falsehood travels, the truth will catch up with it one day. Oshiomhole can fool people for a long time but he cannot fool the people all the time. What is happening to him now is a moment of truth. This same man who was garrulously proclaiming the end of the political career of some other people is now about to meet his Waterloo.

“He has continued to use his mouth to divide his party and I believe there is a lesson for all politicians to learn from the fate of the suspended APC chairman. No autocrat can successfully pretend to be a Democrat. The true character of a man will come out one day”, he said.

Saraki further stated that all lovers of democracy should be interested in the emergence of a healthy and strong party system and organisation which would provide viable platforms for people to aspire and provide quality leadership to the country.