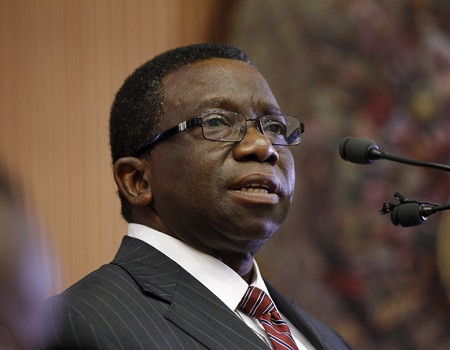 AS part of efforts to ensure the re-election of President Muhammadu Buhari, the Minister of Health, Prof. Isaac Adewole has launched ‘Buhari Leekan Si’ (Buhari for another term) project.

This was contained in a statement by the project’s Director of Media and Publicity, Mr Samson Owoyokun in Ibadan on Saturday.

The News Agency of Nigeria(NAN) reports that ‘Buhari Leekan Si’ initiative, a self-funded project of the minister was to complement the party`s campaign structure.

NAN reports that the initiative is aimed at canvassing professionals and artisans to support Buhari’s reelection bid in the six south-west states with extension to some parts of Kwara and Kogi states.

Owoyokun said the initiative is an operational political structure committed to the propagation of Buhari’s achievements in the last 44 months as a leverage for his reelection.

It said that part of the statutory obligation of the initiative was also to encourage participation in the electoral system across all wards of the south-west states.

He said that the minister would meet professionals in all the major sectors, registered associations of artisans as well as religious and traditional leaders.

“The aim of the meeting is to motivate and persuade them on the need to reelect the president and all other APC candidates in the listed states.

“This will enable the president to complete the restoration agenda which he kick-started in 2015 across all sectors of the country including the health sector,” he said.

He said that what the minister met in the health ministry on assumption of office in November 2015 was appalling and embarrassing, saying almost all the health indices were in the negative.

Owoyokun said that health statistics and data generated from both non- governmental and international organizations were scary.

According to him, “we met collapsed medical facilities. What we have as at the last quarter of 2018 is a new beginning, having revitalized all the federal teaching hospitals.

“We ensured personnel were efficient and equipment more effective to provide functional as well as qualitative healthcare services.”

He said that on assumption of office no single linear radiotherapy machine for cancer patients was working, adding the two machines in the National hospital and LUTH were today up and running.

“Today, UCH and ABUTH are in the process of installing theirs. Our bid to ensure Universal Health Coverage (UHC) is gaining momentum as we have revived over 1,000 primary healthcare centres across the country.

“This is a pointer to why our vaccination for children has improved, child and maternal mortality dropped, malaria incidences crashed and rate of communicable and non-communicable diseases have reduced drastically,” he said.

40% of cancer cases can be prevented in Nigeria ― Health Minister