Gov Lalong attributes peace in Plateau to prayers of intercession 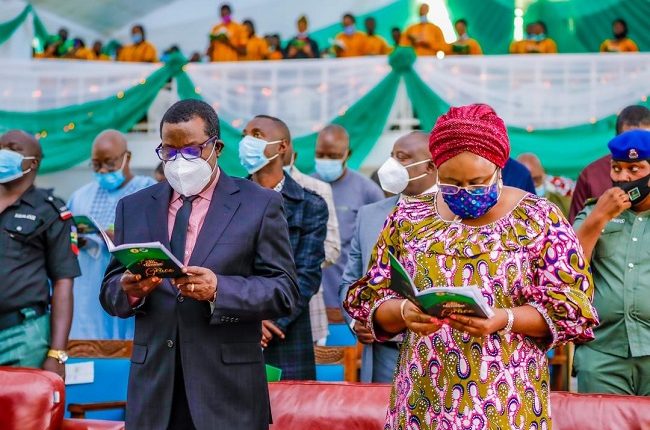 Governor Simon Bako Lalong has attributed the prevailing peace in Plateau State to the prayer of intercession from the people of Plateau State and other friends of the state across the world who have interceded for the peace and progress of the Home of Peace and Tourism saying God is answering Plateau prayers.

Lalong who stated this while speaking on Wednesday at the 6th annual Plateau Prayer Day held at the Government House Chapel, Rayfield, Jos said the state is gradually leaving its past experience of instability which almost robbed it of the God-given potentials.

He said, “When we look back at where we are coming from particularly before our administration came on board, we have every reason to give thanks to God and continuously depend more on the Lord even at this critical time of our history.”

He thanked Christian and Muslim faithful in the state for not only praying consistently for Plateau State, but also participating in preaching love, unity, forgiveness and tolerance which has engendered tranquillity that is the basis for any development.

Lalong said the choice of the theme for this year’s prayer day which is “By His Grace” is very apt because it captures the grace of God towards the people of Plateau State and Nigeria who have had to contend with difficult challenges occasioned by COVID-19 and other issues.

He emphasized the determination of his Government to do its best in providing purposeful leadership that inspires confidence, supports peaceful coexistence, delivers basic services and infrastructure as well as leave behind lasting legacies for generations yet to come.

Guests speaker Rev. Yakubu Pam, Chairman Nigerian Christian Pilgrims Commission who spoke on the topic “By His Grace” said the grace of God gives hope, joy and patience to wait for the manifestation of His power among people.

He admonished the people of Plateau State not to take the grace of God for granted by returning to the past experience of bitterness, intolerance, violence and incitement which undermined the progress of the State.

As this year’s Prayer Day coincides with the 45th anniversary of the State, he urged them to continue to support and pray for Governor Lalong and all other officials of the State as well as the President for God’s divine wisdom to do more in taking Plateau State and Nigeria to higher heights.

Chairman Christian Association of Nigeria Rev. Fr. Polycarb Lubo appreciated the Governor for setting aside the 3rd of every February as Prayer Day for the State, saying this has demonstrated that the Government and its people depend on God for direction.

Speaker of the Plateau House of Assembly, Nuhu Abok Ayuba, Chief Judge Gyang Dakwak, Commissioner of Police Edward Egbuka and Long Gamai of Shendam Miskoom Martin Shaldas III all applauded the Prayer meeting and said the event was another sign of hope for the state.

The British Parliament at the Westminster Hall held a debate on ‘e-petition 554150, relating to Nigeria and the sanctions regime’ on Monday. The government of the United Kingdom has however responded…Gov Lalong attributes peace

Women protest in Edo over alleged killings by herdsmen