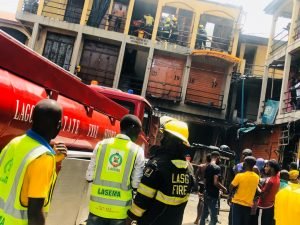 Household utensils were destroyed in a fire which razed two shops at Maola Shopping Mall in Idumota area of Lagos State on Friday.

According to him, the combined efforts of emergency agencies put out the fire within 30 minutes.

“Upon arrival of the emergency responders at the scene, it was revealed that a building (Maola Shopping Mall) was affected by a fire of unknown origin.

“Only shops 35 and 36 on the last floor of the building stocked with different goods such as cartons of detergents, kitchen utensils were affected with the fire and no casualties,” Oke-Osanyintolu said.

He said that the responders had returned to their bases and also urged members of the public to comply with the COVID-19 social distancing guidelines laid down by Governor Babajide Sanwo-Olu to avoid endangering themselves.