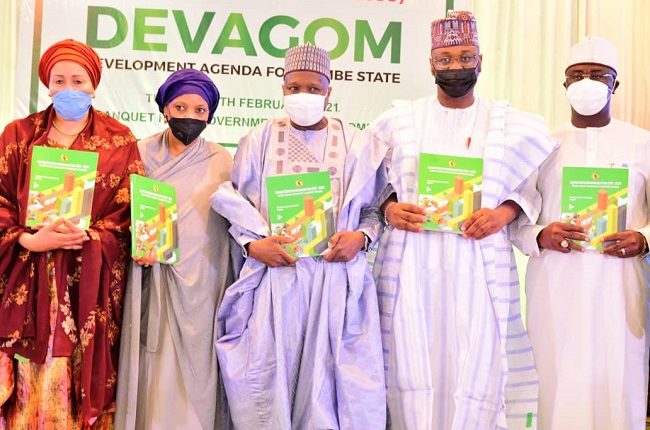 Gombe State Governor, Muhammad Inuwa Yahaya has unveiled a 10-year development plan that seeks to propel the state to a self-sustainable model in the area of agricultural, industrialisation, commerce, trade and human resource development.

While unveiling the plan tagged, Gombe Development Agenda (DEVAGOM) at a grand ceremony, the governor said, “DEVAGOM is a product of synergy and collaboration with local and international partners that will put in place necessary structures and institutionalized reforms that will drive its effective implementation”.

According to him, DEVAGOM is an attempt to harness the immense potentials of the state by taking advantage of emerging opportunities and tackling its challenges and threats in order to realise it’s development objectives adding, “It is the road map for the transformation of Gombe State that is aligned with Sustainable Development Goals (SDG’s)”.

He said that a meet-the-people assessment tour was carried out in 420 communities across the 114 wards of the state by his administration to ascertain the developmental needs and priorities of the people.

He said in order to create a better future for the people of the state, his administration is making relentless efforts to stimulate and sustain economic growth and human development.

“DEVAGOM projects Gombe to be a terminus that encapsulates growth, development, prosperity for all. Considering our comparative advantage in agriculture, commerce and trade, our tremendous human and natural resources and our strategic position at the centre of the Northeast subregion, I have the conviction that our vision is both realistic and achievable”, Governor Inuwa said.

The governor then acknowledged the office of the Senior Special Assistant to the President on SDGs and the United Nations Development Programmes (UNDP) for supporting the preparation of the plan.

Deputy Secretary-General of the United Nations, Hajiya Amina Mohammed, while calling for the implementation of the plan said, DEVAGOM was in consonance with the 2030 Sustainable Development Goals SDGs.

She encouraged the domestic resource mobilisation, which she believes will attract everyone from all angles to contribute to the realisation of the goals of the plan.

Hajiya Amina also called on the government to invest in the development of Gombe into a future city because predictions were in cities.

While urging the people to support the government towards actualising the plan, Hajiya Amina equally urged the state government to ensure the inclusion of women and youth in the implementation as well as close the gap in the digital divide so that everyone should understand the digital world because of it’s future.

“That is why this plan is important for us to invest in Gombe and all local government headquarters that they also became cities so that the people of Nigeria would want to come to Gombe, Lagos or Abuja. We can do it, we can be as good as it is in Nigeria and beyond, so let us invest in the cities of tomorrow,” she stated.

The Minister of Communication and Digital Economy, Dr Isah Ali Ibrahim Pantami, also considered the implementation of the plan as the main challenge that would be encountered which must be tackled.

He called on all stakeholders to collaborate, go beyond the development plan and ensure its successful implementation.

According to him, his ministry was ready to collaborate with the state government to ensure 100 per cent implementation of ICT component of the plan.

“The Federal Government of Nigeria through the Federal Ministry of Communication and Digital Economy wants to join hands with the state government to ensure 100 per cent implementation of the ICT plan in Gombe State. And I hope the governor will direct the relevant officers to meet with us immediately after the event to start its implementation today and not tomorrow,” the minister stressed.

The occasion witnessed the attendance of many prominent personalities from within and outside Nigeria as well as some who participated virtually and gave their goodwill messages.