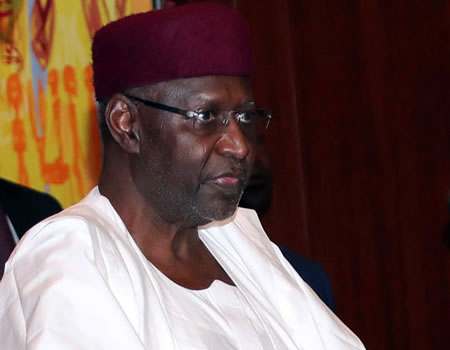 The Speaker of the House of Representatives, Hon Femi Gbajabiamila, described as shocking and sad, the passing away of the Chief of Staff to the President, Mallam Abba Kyari.

Hon Gbajabiamila said it was unfortunate that Abba Kyari died as a result of the COVID-19 pandemic, which is now ravaging countries all over the world.

He said Kyari would be remembered for his selfless and dedicated service to Nigeria right from his days as a private citizen through the time he served as the Chief of Staff to the President.

In a condolence message by his Special Adviser on Media and Publicity, Lanre Lasisi, the Speaker said Nigeria has lost a patriot in the person of Kyari.

“With Kyari’s and other Nigerians’ death as a result of COVID-19 pandemic, the country needs to do everything possible to avoid further spread of the disease, while taking care of those that tested positive so far.

“I am particularly saddened and shocked at the demise of the Chief of Staff to the President. Here was a person who was highly patriotic and who showed the highest level of commitment and dedication to duty.

“Malam Abba Kyari would be remembered for his contributions to the development of the country at various stages of his life, including the last few years that he had served as the Chief of Staff to the President.

“I believe Kyari died while serving the country as he contracted the disease during his trip to Germany in March on a national assignment as part of efforts to find a lasting solution to the intractable electricity problem in the country.

“This is indeed a great loss to Nigeria. My thoughts and prayers are with his family at this trying time. I also want to extend my condolences to President Muhammadu Buhari for this loss.

“Death is inevitable for every human. The deaths of Malam Abba Kyari and other Nigerians at this time call for us all to rise as a nation and fight the COVID-19 pandemic in every possible way we can.

“Let’s all follow the guidelines set out by the authorities in preventing further spread of the virus. As leaders, we must also make conscious efforts at improving our healthcare system with a view to containing such pandemic.

“While we all grieve, let’s pray that the Almighty God will grant the Chief of Staff and other Nigerians that died as a result of this pandemic a good resting place,” the Speaker said.

Deputy Speaker of the House of Representatives, Rt Hon Idris Ahmed Wase, also condoled with President Muhammadu Buhari over the death of his Chief of Staff, Mallam Abba Kyari.

Hon Wase, in a condolence message by his Chief Press Secretary, Umar Muhammad Puma described Kyari’s death as” sad news and great loss to the nation.

“It is saddening to learn of the death of Mallam Abba Kyari, the Chief of Staff to the president. His death is a great loss to the present administration and the nation in general.

“I wish to condole with President Muhammadu Buhari over this sad news. My condolences also go to his immediate family, the governor of Borno State, Prof Umara Zulum and indeed the entire people of Borno State.”

He said the deceased “died in active service working for his fatherland, which is a mark of his patriotism, integrity and undying zeal to ensure a better Nigeria.”

According to the Deputy Speaker, “Abba Kyari was a patriotic, conscientious and hardworking Nigerian, who contributed immensely to the socio-economic and political development of Nigeria,” adding, that “Kyari’s positive contributions to humanity and Nigeria at large would remain indelible in the psyche of millions of Nigerians.”

Also, the minority caucus in the House of Representatives expressed shock and deep sadness over the death of the Chief of Staff to the President, Mallam Abba Kyari, describing it as a monumental loss to the nation.

Hon Elumelu described Abba Kyari “as a very humble, loyal and exceptionally dedicated Nigerian who gave his best to the service of our dear fatherland, particularly as the Chief of Staff to the President

“Our caucus condoles with President Muhammadu Buhari, the Kyari family, the government and people of Borno state as well as the Federal Executive Council and prays the Almighty Allah, in His mercies, to grant eternal rest to the faithful departed as well as give the bereaved the fortitude to bear this huge loss”.

Senator Wamakko, who represents Sokoto North Senatorial District, expressed shock on the death of the late closest aide of the President.

According to him, “death is however inevitable, as every living thing, must taste it, at the God’s appointed time.

“We have therefore nothing to do, but to most humbly, faithfully and totally submit to the sovereign will of the Almighty Allah.

“While bereaving on the death of the Chief of Staff to the President, I am sincerely and most profoundly condoling with the President, the immediate family of the deceased and the entire Nigerian citizens.”

Also, Senator Dino Melaye in a press statement issued, on Saturday, said “may his soul rest in peace and may God grant his loved ones the fortitude to bear this loss. This is a circle we must all complete someday. We need to be prepared and live with faith and honour.

“That hour and time knoweth no man and shows us that God drives out chariots to his door where death is our ultimate destination.

“What will death find you doing when it comes visiting? Your character becomes your shield. May we all be in God’s favour when our time is up.”

Ajulo said this in a message of condolence on the passing of Kyari, who he described as a brilliant lawyer and a dedicated administrator.

The human rights lawyer, while saying that death is inevitable and also a leveller, prayed God to accept Kyari’s return, forgive his sins, and console his family.

“I grieve at the loss of a brilliant lawyer and dedicated administrator.

“He died in active service to Nigeria.

“May God accept his return, forgive his sins, console his family, and save all of us.

“Death is inevitable and it’s a leveller,” Ajulo said.