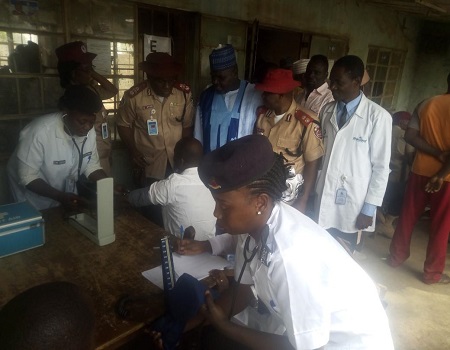 As the Federal Road Safety Corps (FRSC) marks 32 years of its establishment, it has vowed to continue to fight against corruption and corrupt practices within the corps until every bad egg was removed.

The Corps also warned all roads users to always obey road traffic regulations observing that the high rates of accidents across the country were due to their failure to obey these regulations.

Zone Rs 12 Commander of the FRSC, Assistant Corps Marshal Etuk Imoh, stressed that: “We have always said that both the giver and the taker are guilty and many of them face guard room trials, many of them are being investigated. It is not as if we don’t have bad eggs but we urge members of the public to report those bad eggs, those people that are spoiling the corporate image of the Corp because it is the corporate image of the Corp that is at stake. The bad eggs are always fished out and they are punished.”

He added that: “I have sensitised them that anyone caught will not escape the wrath of the law, we do monitoring and surveillance, we do sensitisation lectures in-house, we talk to them, and this is not to say that there won’t be a few pockets of indiscipline here and there, but we are urging members of the public to report such to us and we will deal with them accordingly.”

The FRSC Zonal Commanding Officer of the FRSC, Zone 12, comprising of Bauchi, Borno and Yobe States, Assistant Corps Marshall, Imoh Etuk, who was speaking in an interview during a sensitisation rally and free medical outreach to motorists in Bauchi to mark the Corp’s 32 years anniversary warned that it will not spare any of its officers found to be extorting members of the public while carrying out their duties.

According to him, the free medical outreach to motorists was part of its corporate social responsibility of giving back to the public while celebrating 32 years of its establishment.

He said that: “FRSC is 32 years today and we are grateful to God that has helped us these years to carry out the statutory objectives of the establishment act 2007 which says we should reduce crashes to the barest minimum, clear obstructions, do public enlightenment.”

“The crashes that occur, quite frankly, occur at night, yes, we are supposed to do rescue operations 24/7, but you know rescue at night is not the same thing with that of the day.”

The Zonal Commander also said that: “Members of the public should obey road traffic regulations, not to overload their vehicles, ensure that their vehicles are in good shape and they shouldn’t drive under the influence of drugs. A lot of drugs, tramadol and many others, are being sold in parks. Thank God we have been sensitising them not to sell but these drivers always find a way of taking these drugs before driving and the influence of drugs is not palatable.”

Etuk Imoh said that apart from the public enlightenment and rally to mark the 32nd anniversary, the FRSC is also giving back to the society urging that people should check their blood pressure, their eyesight, their weight, so that they don’t just go on the road without knowing what is wrong with them.

According to him, “The medical outreach is necessary because drivers must have a healthy mind and healthy body and they must ensure they are okay.” Once you know, you will be able to control it, it’s a whole package that we give them not only not to overload their vehicles, not to drink and drive but to also check their eyesight.”

He said that FRSC at 32 is a wake-up call to them to do more to ensure that road crashes are reduced to the barest minimum.

He then called on traditional rulers, spiritual leaders and stakeholders to team up with the FRSC to reduce road crashes in the state.

Also speaking, the State Chairman, Road Transport Employers Association of Nigeria, Bauchi State Chapter, Comrade Abdullahi Mohammed, who felicitated the FRSC at 32 said the Association’s relationship with the Corps has been very cordial.

He called on the Federal Government and other major stakeholders to help the FRSC with more operational vehicles to enable them to respond to emergency situations.

Abdullahi Mohammed then pleased that, “If you notice now, if there’s an accident along Bauchi-Jos road for instance, once the FRSC vehicle conveys the victims to the hospital and another crash occurs somewhere afterwards, they wouldn’t be able to go because they don’t have enough vehicles. The Federal Government should provide them with more vehicles to ease their work.”

‘The Slave Driver’ movie: a campaign against divorce