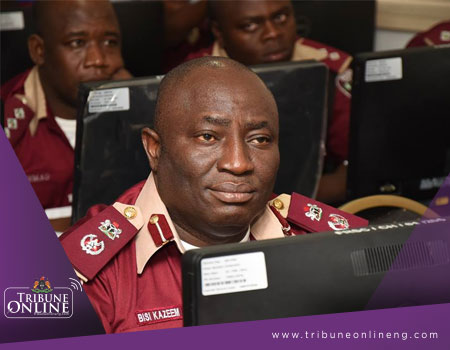 THE Federal Road Safety Commission (FRSC) has disowned the fake employment letters of appointment into the corps currently in circulation in the country, describing it as a scam.

This is contained in a statement signed by the agency’s Public Education Officer, Bisi Kazeem, and made available to the News Agency of Nigeria (NAN) in Abuja on Friday.

NAN reports that the FRSC had on May 28, asked interested applicants to upload their application forms on the FRSC recruitment portal.

NAN also reports that the FRSC on Sept. 13 issued a statement distancing itself from such fake appointment letters and scheduled its screening and physical fitness assessment on recruitment for Sept. 24 to Sept. 29 across all the states.

Kazeem said that the screening of applicants by the FRSC had commenced transparently nationwide and the process will climax with an aptitude test to be conducted by the Joint Admission and Matriculation Board.

“There will also be an interview for all successful applicants after the aptitude test.

“So, the purported employment letter in circulation is a scam,” he said.

He advised applicants and Nigerians to be wary of swindlers and mischief makers.

“We hereby further warn applicants not to fall for these fake employment letters, “he said.

He attributed the circulation of the fake appointment letters to the handiwork of fraudsters aimed at defrauding unsuspecting applicants or for the purpose of discrediting the Commission.

The FRSC spokesman said that the fake employment letter had surfaced before the commencement of the screening exercise and was promptly disclaimed by the FRSC.

He reminded the applicants that the Corps Marshal does not sign appointment letters, as was done in the letter in circulation, saying the format also does not conform to FRSC standard.

“The contact number or name of our staff is never included in employment letters.

“The name of the Deputy Corps Marshal mentioned in the said letter was wrongly spelt.

“The wording and language of the letter clearly showed that it did not and cannot emanate from a world-class organisation like the FRSC,” he said.