French Dairy Board honours pastry chefs of the future 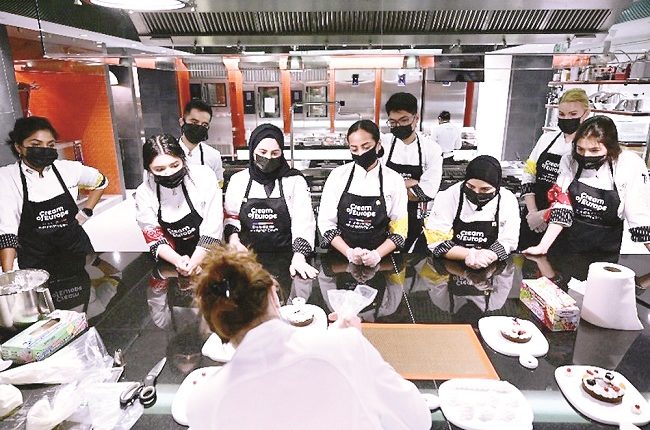 The French Dairy Board and the European Union, have once again proved its commitment to supporting the next generation of pastry chefs in the Middle East through the organisation of the Cream Spirit competition, which saw Jordanian, Sanad Jaber crowned the winner.

The competition, held at the International Centre of Culinary Arts (ICCA) Dubai, forms an integral element of CNIEL’s commitment to training, educating, and teaching aspiring young and future pastry chefs in the GCC. As part of the campaign, they had the opportunity to learn from one of the world’s foremost pastry chefs, Claire Heitzler, a protégé of the legendary chef Alain Ducasse.

A total of 11 budding pastry chefs from countries including the UAE, Jordan, Morocco and India took part in the competition. Joining Jaber on the ‘top table’ were Intissar El Soussi from Morocco, and Sudhakshina Iyer from India.

Laurent Damiens, Director, CNIEL, said: “Despite the difficulties of the past year, we are committed to providing young chefs and future professionals with the opportunity to challenge themselves and learn from some of the best in the business.”

“Every year, we are blown away by the talent from the region, and this year was no different. The creativity, taste and presentation of what we have seen were extraordinary,” he added.

As part of the competition, all aspiring chefs were treated to a demonstration by Chef Claire, who showcased her skills when making a Mont-Blanc, a classic of French pastry. This was followed by a Q&A session where all competing chefs had the opportunity to learn more from Chef Claire and brothers; Chef Wassim and Omar Orfali.

Concluding the day, a roundtable discussion was held to review the pastry industry with topics including sustainability, zero-waste, origin, and quality all discussed during the session.

The British Parliament at the Westminster Hall held a debate on ‘e-petition 554150, relating to Nigeria and the sanctions regime’ on Monday. The government of the United Kingdom has however responded…French Dairy Board  French Dairy Board

The surprise visit made on Friday night by the leaders of the ruling All Progressives Congress (APC) to former President Goodluck Jonathan at his residence in Abuja triggered a stir in the major political camps, resulting in at least four possible theories..French Dairy Board  French Dairy Board

Kukah: What’s the noise about?