Fraudsters who hypnotised girl, collected N1.4m from her in police net in Oyo 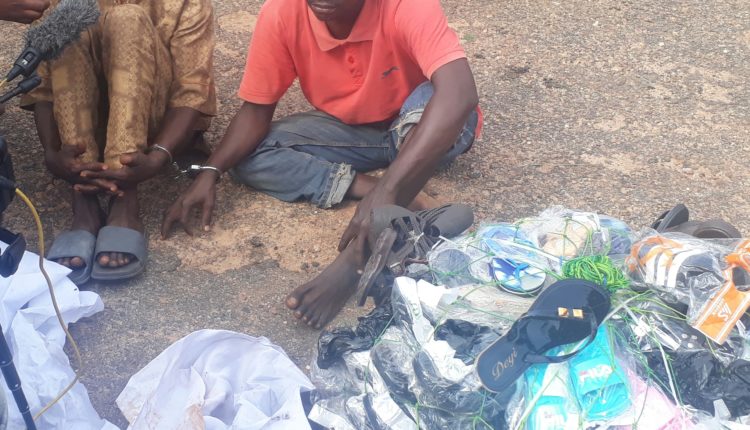 OPERATIVES of the Oyo State Police Command have arrested two suspected fraudsters who hypnotised a sales girl and collected the N1.4 million her boss sent her to deposit in a bank.

The suspects, Taiwo Salami (39) and Kamorudeen Amusat (63), were among the suspects paraded by the Oyo State Police Command, Eleyele, Ibadan, on Thursday.

Speaking during the parade, the state Commissioner of Police, Shina Olukolu, said the victim (names withheld), was sent by her boss on May 6, at about 11:30 a.m. to deposit N1.4 million at a bank in Dugbe area of the city.

The police boss said: “On her way, she was accosted by one of the suspects, Taiwo Salami, who hypnotised her, and having lost her senses, she was taken to an abandoned house at Inalende area of the city, where the cash was collected from her, while the suspects also inflicted several injuries on her.

“On May 8, the victim’s family members reported her disappearance at the divisional police headquarters at Mokola. She was later rescued and taken to the hospital for medical attention.

“The case was then transferred to the State Criminal Investigation Department, and on June 7, following a tip-off, the suspects were arrested around Eleyele, and upon interrogation, they confessed to the crime,” Olukolu said.

While speaking with the Nigerian Tribune, Salami, who admitted that he was fully into fraud, said when he saw the victim, he sensed she had money and that was how he approached her and hyponotised her.

He said: “She then followed me to Inalende area, where she was kept in a room in an abandoned building and the money collected from her.”

However, Nigerian Tribune learnt that the suspects, apart from inflicting injuries on the victim, who was a virgin, also raped her several times.

It was suspected that the victims were even planning to use her for ritual because of the injuries on her body, but Salami said they were only after the money and nothing else.

He also could not explain why he didn’t release the girl immediately after collecting the money from her.

Although his co-accomplice, Amusat, denied being part of the abduction, Salami said he knew about everything, as he also collected N200,000 from the money.

Salami said they both work together, looking for those with huge sums of money in order to hypnotise them.

Olukolu, however, said the suspects would be charged to court upon conclusion of investigation into their crime.

The police also arrested a suspected cultist, Araoye Adeniyi, in Ogbomosho area of the state, following a tip-off from a member of the public.

Adeniyi, who claimed to be a member of Eiye confraternity, was arrested on June 6, while on a motorcycle.

Olukolu said the suspect was found with a bag fastened to his back, but when policemen searched the bag, they found two locally-made pistols, four live cartridges, one jack knife and one cutlass.

The suspect, who claimed to be a student of the Ladoke Akintola University, Ogbomosho, however, said he was going the deliver the weapons to one of his cult members.

Six suspected armed robbers who had been terrorising travellers along Kishi/Igbeti highway were also arrested, with six locally-made guns recovered from them.