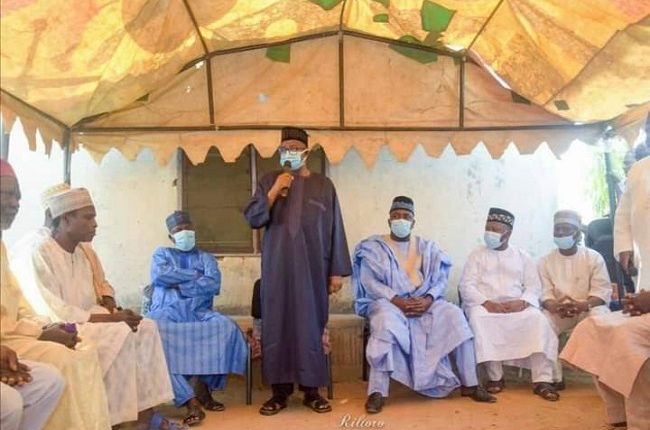 Former North-East Zonal Chairman of the Christian Association of Nigeria (CAN), Shuaibu Byal, was, on Monday, buried at the Christian Cemetery in Bauchi after a funeral service held at ECWA Church Rafin Zurfi with thousands of sympathisers in attendance.

While speaking at the funeral service of the deceased, former Deputy Governor of Gombe State, John Lazarus Yorio, charged leaders in all spheres of authority to be fair and just to all people irrespective of religion or tribe reminding the congregation that they will one-day face judgement before God.

John Yoriyo said: “Rev Shuaibu Byal has finished his course and I want to charge all of us that are still living, particularly, those of us in politics and those currently in government. Do you see what is happening here in the North? Are you a traditional ruler, a Commissioner or Governor? Let’s be fair to all.”

He further said that “Today, even if you want to gain access into a place, they’ll have to check to know who you really are. Let’s be very careful. We that God has given the mantle of leadership, let’s be very careful because whatever a man sows, that he shall reap.”

“I am happy that the Lawmaker (Musa Nakwada), spoke about the justice the Bauchi State governor does to the Christians and the Church in the state, we are grateful to him, he should do more,” he said.

John Yoriyo further said that “Other g=[=overnors, if you think that God gave you that opportunity to be where you are today in order to oppress the masses and favour just a few people over others, just wait, a day of judgement is coming. Is it not money, wealth, power and amassing properties for yourselves?

“Continue doing that when many are dying because of hunger and starvation, unemployment and many others, you’ll all reap what you’re sowing and you’ll see stand before God to give account to him,” he admonished.

John Yorio who urged the family to be thankful to God because the Bible says that God is the husband to the widow and the father to the fatherless assured them that God will care for them more than when their father did when he was alive.

He advised them to “stick to God. My father died when I was just an infant and I can assure you that if you hold on to God, you will never be put to shame. Don’t cry, God has a purpose for taking him.”

The Member of representing Bogoro Constituency in the Bauchi State House of Assembly, Musa Nakwada, who led the State Government’s delegation, described the deceased as someone who was part of the struggle that brought the present administration in the state into power.

Musa Nakwada who said that the Bauchi State Governor, Sen Bala Mohammed Abdulkadir, expressed great shock when he broke the news of the death to him said: “When I heard the news of his death, we mobilised ourselves and went to the Government House to inform the Governor.”

“The moment I told the governor, immediately, he stood up from his chair because he was shocked and confused. He said, ‘what?! Nakwada!’ and I told him that Rev Byal is dead. He ordered everyone in the room to keep quiet because ‘Nakwada has told me that Rev Byal is dead.’ That was his reaction.

The lawmaker added that, “He asked us to come the next day so that together we will go and console his family. He then told us that recently, Rev Byal did a write-up which was brought to him, it was about the school (ECWA Theological Institute) that some Missionaries are coming concerning an issue they have and requested the Governor to meet with them.”

“Already, that request has been approved by the Governor as I speak with you. If we are talking about this current government, the role Rev Byal played cannot be overemphasized”, Musa Nakwada added.

According to the Lawmaker, the deceased gathered all the Christian appointees under Governor Bala Mohammed led the administration and prayed for them and also advised them so that they can succeed.

He expressed gratitude to the Bauchi State governor for giving Christians many appointments in his administration saying that they have not been such opportunities before in the state except now.

It will be recalled that late Shuaibu Byal, a former North-East Zonal CAN Chairman was, until his death the Rector, ECWA Theological College, Bayara, Bauchi State, died on Friday evening at the age of 63 after he slumped and was rushed to the hospital where he was confirmed dead. He was survived by a wife, Hauwa Byal, five children and many relations.

VERDICT: FALSE. Registration can make you lose your WhatsApp account to scammers.Former North-East CAN Chairman buried amidst tears

FULL TEXT: A viral post on WhatsApp is asking N-Power candidates to verify the status of their application and see if they have been shortlisted for the batch C cash grant…Former North-East CAN Chairman buried amidst tears