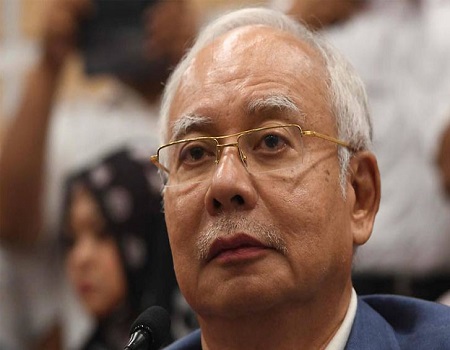 Najib Razak, the former leader of South-East Asia’s third-biggest economy, was told by a judge on Thursday morning to leave the courtroom where wife Rosmah Mansor is on trial for corruption.

Prosecution lawyers complained about Najib’s arrival at 68-year-old Rosmah’s second day of hearings at Kuala Lumpur High Court, saying that he is “a potential witness” in her trials. Judge Mohamad Zaini Mazlan then asked the former prime minister to leave.

According to dpa, Mazlan cited “a risk of danger” and dismissed the defence team’s contention that Najib was being a “good husband” by supporting his wife in person. No complaint was raised by the defence when the former premier briefly joined Rosmah in court on Wednesday.

Najib is facing multiple corruption charges in separate trials that started last year and is due back in court on Monday for his next hearing.

Najib is accused of looting hundreds of billions of dollars from a state fund called 1MDB, allegations that played a major part in his election defeat. US investigators suggest 4.5 billion dollars could have been stolen from the fund to pay for luxuries such as artwork, yachts and overseas properties.

Najib led Malaysia’s government for almost a decade until May 2018, when his National Front coalition lost power in parliamentary elections to a group of four parties led by Mahathir Mohamad, who at 94 is the world’s oldest head of government.

Rosmah’s trial was due to start on Monday but was delayed until  Wednesday when she arrived at the court building with an ambulance in tow after claiming to be in poor health.

Rosmah, whose ostentation was a source of public controversy during Najib’s time in power, is accused of taking a 6.5-million-ringgit (1.58-million-dollar) bribe related to solar power projects in eastern Malaysia, on the island of Borneo.

After Najib was ejected from the courtroom, his former education minister Mahdzir Khalid testified that he was asked to terminate an existing contract using generators to power schools in the region, potentially paving the way for solar power alternatives.

Najib in July 2016 sent a letter to the Education Ministry asking that the contract be given to the company, Jepak Holdings, from which Rosmah is accused of seeking bribes.

Shortly before Najib entered the courtroom on Thursday morning, Shamsul Rizal Sharbini, a 42-year-old driver for the company, was describing bags of cash being brought to one of the couple’s residences in Kuala Lumpur.