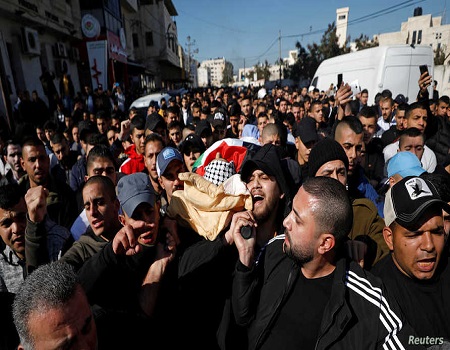 Violence gripped parts of Jerusalem and the West Bank on Thursday, leaving several Palestinians dead and 12 Israeli soldiers and a police officer injured in Palestinian attacks.

Conflict in the region seems to have spiked in the days since the US unveiled its Middle East plan last week.

Israel has conducted nearly daily strikes on Hamas targets in the Gaza Strip in response to rocket, mortar and incendiary balloon attacks in the days since Trump’s announcement.

A 17-year-old teenager was killed in the West Bank city of Hebron on Wednesday during clashes with Israeli soldiers, becoming the first protester killed since the US unveiled the plan. In response, the militant Hamas movement called for an escalation in the West Bank.

The Israeli army said that soldiers had seen a petrol bomb being thrown at them and responded to the assailant with gunfire.

Early Thursday, a 19-year-old was killed and seven other Palestinians were injured in clashes in the northern West Bank city of Jenin.

A Palestinian man, a police officer, later succumbed to wounds sustained in the clashes in Jenin, according to Palestinian sources.

According to the Israeli army, soldiers had entered Jenin to destroy the home of a Palestinian attacker. There were sizeable riots and soldiers had killed a sniper, the army said.

In Jerusalem early Thursday morning, a vehicle-ramming attack near a bus station left 12 Israeli soldiers injured, one of them seriously.

Police are searching for the driver, who fled the scene.

The army spoke of a terrorist attack in which the driver had targeted soldiers.

Palestinian sources said that the army had seized a car believed to be the attacker’s in Beit Jala, a Palestinian town 10 kilometres south of Jerusalem and that soldiers were searching homes there.

Israel’s Magen David Adom emergency services said that a 20-year-old was in serious condition after the incident on David Remez Street at around 1:45 am (2345 GMT Wednesday) and was taken to hospital.

In Jerusalem’s Old City, a Palestinian man was killed on Thursday after a shooting at an Israeli border police officer near the Temple Mount. The officer received a slight hand injury.

Areas of the Old City have been closed down in light of the attack.

US President Donald Trump unveiled his Middle East plan last week, which he said would end the Israeli-Palestinian conflict.

The plan foresees Israeli control over the West Bank, Jordan Valley and key holy sites in Jerusalem. Palestinians have outright rejected the plan, fearing that it will recognize Israeli claims to parts of the West Bank, which they want for their future state of Palestine.

After calls by the Palestinian leadership for protests, there were isolated strikes and demonstrations in the West Bank and Gaza Strip.

However, an Israeli army spokesman did not connect the events, saying only that there has been a rise in the intensity of attacks on the Israel Defence Forces in the last few days.

Israel captured the West Bank in the 1967 Six-Day War, and it is considered occupied territory by most of the international community.