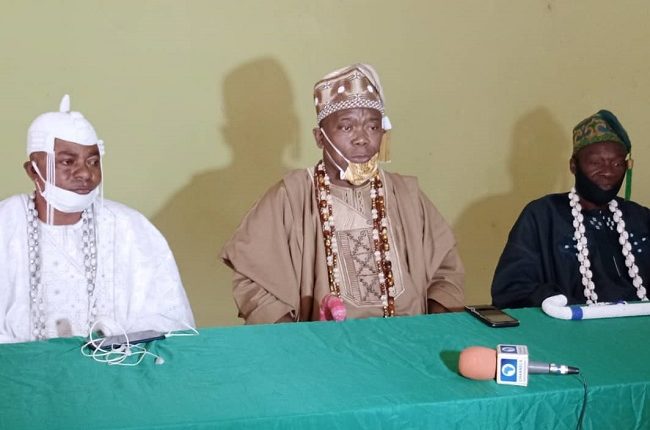 Traditional rulers in Ogun Waterside Local Government Area of Ogun have called for the removal of the Transition Chairman of the Council Area, Mr Femi Onanuga, for allegedly “disrespecting traditional institutions.”

The monarchs at a press conference in Abeokuta, on Friday, said the embattled chairman had not shown remorse for the allegation levelled against him.

Speaking on behalf of his colleagues, the Ojutumoro of Abigi, Oba Olusegun Ogunye, called on the State Governor, Prince Dapo Abiodun, not to reappoint Onanuga for another three months in office.

Ogunye explained that the LG boss failed to heed to the advice of the governor and the State Commissioner for Local Government and Chieftaincy Affairs, Hon. Afolabi Afuwape, hence their resolve to ask that his tenure in office should not be extended by the government.

“We want him to be totally removed from office so that it’s going to serve as a deterrent to others that there are some institutions that must be respected and that is the institution of the Obaship.

“We are here to implore the entire members of the Ogun State House of Assembly not to confirm his continuation as the transition chairman. We also implore the Ogun State Governor not to approve his membership as transition chairman. He doesn’t have any respect for the traditional council. As far as we are concerned, he is not fit and a proper person to rule the local government.

In his reaction, the embattled chairman admitted having some knotty issues with two traditional rulers in the Council in the course of discharging his responsibilities.

Onanuga submitted that the matter had been resolved by political leaders in the state and that he had since written a letter of apology over their allegation.

“As a cultured Yoruba man, I will not join issues with the traditional rulers. They are my royal fathers, I have respect for the tradition.

“My political leaders have intervened and this matter has been settled on June 16. It was after that they took the matter to the House of Assembly. I have appeared before the House Committee on Local and Chieftancy Affairs and also written letter of apology to all of them,” he said.

Social Investment Fund: Reps Summon Adeosun, Ahmed, Farouq, Others Over N1.7trn Allocation
FORMER Minister of Finance, Mrs Kemi Adeosun and the incumbent Minister of Finance, Budget and National Planning, Mrs Zainab Ahmed, are expected to appear before the House of Representatives over N1.7 trillion appropriated for the implementation of National Social Investment Programme (NSIP) from 2016 to September 2019. Also expected to appear is the Minister of Humanitarian Affairs, Disaster Management and Social Development, Sadiya Umar Farouq; incumbent and former permanent secretaries, desk officers involved in the implementation of the programmes in both ministries as well as the National Social Investment Office…Ogun monarchs call for removal of LG boss

PTF Extends Phase Two Eased Lockdown By Four Weeks
The Presidential Task Force on COVID-19 has extended the current phase two eased lockdown by another four weeks. The phase started on June 1, 2020. The extension followed the approval of recommendations made by the PTF to President Muhammadu Buhari. The Chairman of the task force and Secretary to Federal Government of the Federation (SGF), Mr Boss Mustapha, stated this at Thursday’s press briefing in Abuja. saying that there are however some amendments to the phase…Ogun monarchs call for removal of LG boss    Ogun monarchs call for removal of LG boss

SEE THE APPOINTMENT LETTER: Bauchi Governor Gets SA On Unmarried Women Affairs
In a resolve to monitor and regulate the activities of single ladies in the state, Bauchi State Governor, Senator Bala Mohammed Abdulkadir has appointed Balaraba Ibrahim as his Special Assistant (SA) on Unmarried Women Affairs. The appointment of the SA was contained in a letter signed by the Secretary to the State Government, Mohammed Sabiu Baba copies of which was made available to journalists in Bauchi on Thursday…Ogun monarchs call for removal of LG boss