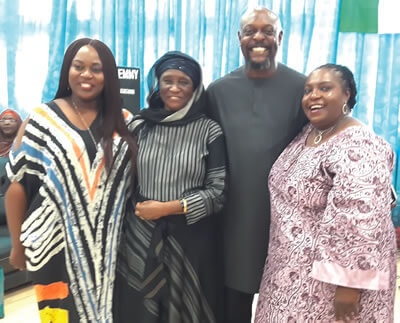 The Maiduguri leg of the Efuru@50 five-city celebration witnessed an outpouring of love for the late Professor Flora Nwapa and her first novel, Efuru.

THEY don’t forget their own at the University of Maiduguri (UNIMAID). Though Flora Nwapa spent only one year there as a visiting lecturer in 1989, they still treasure her memory.

On Thursday, the institution’s management, staff, students and people of goodwillconverged on El Kanemi Hall to honour Nwapa, who joined her ancestors 23 years ago to celebrate the 50th anniversary of her ‘Efuru’, published by Heinemann in 1966 as number 26 in the African Writers Series.

The occasion was actually the Maiduguri leg of the five-city celebration which commenced at the University of Lagos, where Nwapa also worked, on Tuesday. The outpouring of love for the writer was so much that one would have thought she hailed from Borno State instead of Oguta, Imo State.

Senate Leader, Ali Ndume, who chaired the occasion and was represented by poet Baba Shehu Bukar, practically appropriated the writer, noting that it is a celebration “of one of our great daughters who is late.”

Vice Chancellor of UNIMAID, Professor Ibrahim Abubakar Njodi, recalled Nwapa’s time as visiting professor of English in the university and how alongside Professors Tanure Ojaide and Zaynab Alkali, was instrumental  in “boosting and popularizing the MA Creative Writing programme in English.”

Njodi, who was represented by the Deputy Vice Chancellor (Academic), Professor Aliyu Shugaba, further commended ‘Efuru’ and its author thus:  “In all the narratives that span 17 chapters of Efuru, Flora Nwapanever harangues her reader and also never sounds bitter. The main attitude of the women characters in Efuru seems to reflect the writer’s own sentiments about rogue men who populate the novel. They remain proud and true to their imbecile husbands.”

The Vice Chancellor, who disclosed that the university last hosted the national convention of the Association of Nigerian Authors (ANA) in 1984, said it wouldn’t mind hosting the writers anytime soon. “ I believe that it’s time we hosted another convention of the Association of Nigerian Authors to, as it were, leverage the peace that is gradually returning to Borno State, thanks to the efforts of Nigeria’s security forces.” He added that the recession notwithstanding, the university would soon build a befitting arts theatre complex for the Department of Theatre Arts.

The chair, local organizing committee of the celebration, Dr. Razinatu Mohammed, who introduced keynote speaker, Professor Zaynab Alkali said the event is a celebration of womanhood and Flora Nwapa.

In her keynote entitled ‘Nwapa’s Efuru: The Bridge Builder and Defender of the Values of African Womanhood’, Professor Alkali  began by revealing how she and Nwapa met at a Swiss-Nigerian Cultural Exchange in 1989 and how they  hatched a plan for her to come teach creative writing at UNIMAID.

The occasion, she noted, was a celebration bigger than both Nwapa and her novel because “Efuru is not just a novel, and a character in a novel, Efuru stands for the values of African womanhood. The African woman, who was here at the beginning of times, here today and shall be here tomorrow. Nwapa created a timeless African woman whose values transcend time. In ‘Efuru’ we see ourselves, our mothers and several generations of mothers before us. In Efuru, we see our daughters and generation of daughters after us. The creation of the woman Efuru is immortal, and the message for women defies time. I see the author as a bridge builder and a defender of the values of African womanhood. In order for her to construct a solid edifice that can withstand the test of time, and allow the woman to walk away from patriarchal practices which are detrimental to her growth, Nwapa must first of all deconstruct the existing fragile structures before constructing new ones. Thus Nwapa, in ‘Efuru’, set out to rupture and demolish some existing cultural and traditional norms that are not relevant to the building of a new bridge.”

The author of ‘The Stillborn’ also explained that though Efuru’s character as a remarkably empowered woman fits the mould of radical feminism, Nwapa was not one. To her,   “the creation of the female character as empowered and the unusual rupturing of social norms that Efuru engages in, do not translate into making the author a radical feminist. Nwapa does not break up social structures and leave them in ruins. She offers solutions by deconstructing, then constructing and defending what is wholesome in our cultures.”

Northern Nigeria’s most famous female novelist, who shared a revealing experience with Nwapa at the 5th Feminist Book Fair in Amsterdam in 1992 where some radical feminists showed their excesses to further stress that  the late writer was not a radical feminist, said “the author advocates and seeks for the African women the importance of being guided right, of complementarity in relationships, not only in marriage but in the family unit.  What she seeks especially for the educated woman is what Efuru embodies; respect, honour, decorum and dignity, attributes that modernity seeks to erode in today’s women.”

Aside Alkali’s keynote, there were seven other papers presented at the conference.Salamatu Sule’s was titled ‘Flora Nwapa and the Role of Women in African Literature’; Dr. Tope Olaifa’s was ‘Women’s Literature and Peace-building in Africa’ and Egbunu D. Egbunu’s was ‘Flora Nwapa and Snail Sense Feminism in Efuru’. The others were ‘The Umahiri Deity and Women: A Study of Flora Nwapa’s Efuru and Idu’ by Dr. Razinat Mohammed; ‘Literature and the Role of Women Writers: A Study of Flora Nwapa’s Efuru, Mariama Ba’s So Long a Letter and Fatima Alkali’s ‘Personal Angle’ by Safiya Ismaila Yaro and ‘Cosmopolitan Feminism: From Flora Nwapa’s Efuru to We Are All Feminists by Chimamanda Adichie’ by Dr. Paula Uimonenfrom the University of Stockholm, Sweden. The last was ‘Women, Tradition and Change in Flora Nwapa’s Efuru’ by Zainab Abdulkarim.

There was Igbo cultural dances and a drama excerpt from ‘Efuru’ by way of light entertainment for guests including Nwapa’s three children, Ms. EjineNzeribe, Barrister Uzoma Nwakuche and Mrs. Amede Nzeribe by  students of Federal Government College, Maiduguri. The final of the secondary school quiz competition centred on ‘Efuru’  was also very lively. Being the perfect hosts, the Maiduguri local organising committee sent guests off with a cultural evening and sumptuous dinner later in the night.

As Biyi Bandele marches with angels

At Oroworukwo, it’s labour of love for literacy