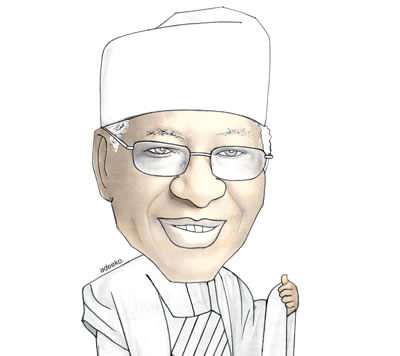 If you call him a super elder statesman, you will be right because he is vastly experienced and highly respected in the political circles in Nigeria.  Should you address him as an old war horse, you will be stating the obvious since he is a veteran who has witnessed many battles, conflicts and successes. He has seen many political empires rise and fall. This characterisation fits none other than Chief Tony Akhakon Anenih, whose political opponents love to call Mr Fix It.

Anenih’s name triggers controversies among the political elite. Like the parable of the blind men and the elephant, some individuals perceive him as a man with guts; others know him for his most Machiavellian style in politics. Love or hate him, Anenih remains a popular figure in party politics dating back to 1983 when he partly railroaded the defunct National Party of Nigeria (NPN) to power against governing Unity Party of Nigeria (UPN) in the then Bendel(now Edo and Delta states) via the infamous seaslide victory.

On the terrestrial plane, August-born Anenih has seen four decades and three years and he is still counting.  After receiving education from various schools, the Esan man joined the police in his state in 1951 and received training within and outside the country, including the International Police Academy in Washington D.C, United States. He was attached to the Great Zik of Africa, as Dr Nnamdi Azikiwe, the first Governor General of Nigeria is called, as a police orderly.  He capped his sojourn in the police by rising to the position of Commissioner of Police before retiring in a cloudy circumstance. It is a subject of debate whether he willingly retired or was forced to exit.

Fresh from the field as a retired police boss, he joined partisan politics and after a stint, he was, in 1981, elected the Bendel State chairman of NPN, a position he held for two years, after the candidate of  his party, Dr Samuel Ogbemudia, had been brought in as the civilian governor.  It was the military junta led by General Muhammadu Buhari that truncated that civilian administration.

When the military administration of Ibrahim Babangida kicked out the Buhari regime, he advertised intention to return power to the civilians. Consequently Babangida decreed a two-party system- National Republican Convention (NRC) and the Social Democratic Party (SDP)- into existence.Anenih soon thrust himself into mainstream politics in the days of the SDP /NRC era through adroit intrigues and manoeuvres with the instrumentality of the late Shehu Yar’Adua’s political machinery. Having lost out in the battle for the presidential and vice tickets, Anenih became a major force in his capacity as national chairman of SDP to fight the cause of the political dynasty frontally.

The annulment of the June 12 poll became the real catalyst for him to literally send more political salvos precisely, and without missing targets. In fact, his critics claim he was of those who negotiated the Interim National Government with arrangement Ernest Shonekan as head to end the June 12 political impase. Part of his staying power was the Peoples Front of Nigeria (PFN) with its satellite in the South-West and South-East under the late Dr Chuba Okadigbo. The caucus frustrated all deft moves to forge a united front to reclaim June 12, even when forces in defeated NRC acknowledged defeat and demanded de-annulment. Rather, the hardliners in SDP’s top hierarchy insisted things must go their way and aligned with the late General Sani Abacha and ex-NRC national Chair, Tom Ikimi to market the regime as it braced up for fraudulent transition programme designed to bury June 12. Some pundits opine that it is this perception that the man is seen as an unorthodox politician who can foil any plot, neutralise any attack, counter any sinister design, tackle any challenge and deliver the votes by any means necessary. This is the context is which he is perceived as a veritable asset in political contests in Nigeria. This also earned him the pejorative appellation of Mr Fix It which he rejected at the launch of his autobiography in Abuja two weekends ago.

“I am persuaded that I have no more ambition nor any point to prove in politics. I am, therefore, glad to declare that, from today, I shall be withdrawing from active partisan politics. I shall, however, continue to avail the country of my experience, give suggestions and offer advice, as a statesman.”

“A few questions arise here. Am I Mr Fix It as a reformer or someone who always does things right? Am I being portrayed as one who gets things settled or fixed? Am I being held out as someone who, by hook or crook achieves results with the belief that the end justifies the means?

“In any case, I do not enjoy this appellation. I have always believed in what I do and I always make sure I achieve success, without listening to the crowd of voices. If I am called an achiever, that sounds more complimentary, satisfying and positive than the ambiguous impression which Mr Fix It connotes,”Anenih had said.

The contents  of My Life and Nigerian Politics, Anenih’s autobiography, are already sparking controversy, a reason some say it is a belated attempt at re-writing history and correcting the largely negative narrative around his person. Two Franks-Chief Frank Kokori and Timi Frank have frankly done justice to Anenih’s claims as they concern MKO and Atiku respectively.

But the questions asked by a segment of the perceptive public are: why did it take Anenih 24 years to speak on June 12 and pass a verdict that MKO was desperate to be president at all costs? Did Anenih in the book explain the circumstances that surrounded his exit from Obasanjo’s cabinet as Minister of Works and Housing, particularly the whereabouts of N300 billion road infrastructure funds? Did he give an account of his chairmanship of the Nigerian Port Authority (NPA)? Did he remember to correct the impression about why he supported Obasanjo’s third term bids? Did he remember to tell Nigerians why Obasanjo opposed his PDP BoT chairmanship bid, following which President Goodluck Jonathan ‘rewarded’ him with the NPA chairmanship?

Anenih is retiring from politics at a time when the mess into which the country has been run has yet to be fixed not even by his party which was in power for 16 years. He is retiring when the political empire he and others built the PDP into has crumbled. The falcon and the falconers in his party have lost communication signals and the party continues to turn in an ever-widening gyre. Sadly,  now that the elders are leaving the market, who will set the head of the newborn aright?