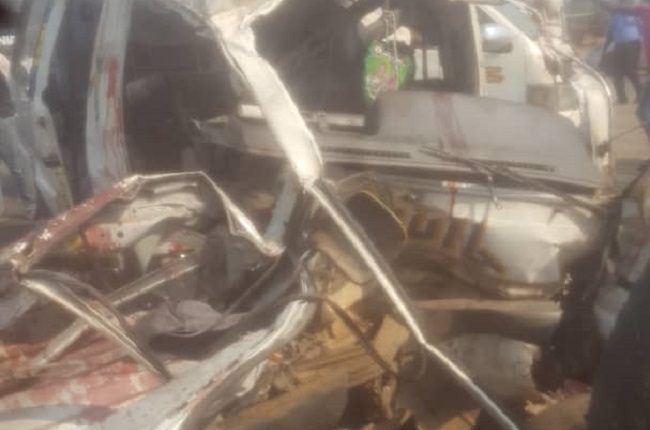 Five persons died, on Wednesday afternoon, in a road accident that occurred at Danliti U-Turn along the Lagos-Ibadan expressway.

The accident, according to the Public Relations Officer, Traffic Compliance and Enforcement Corps (TRACE), Babatunde Akinbiyi, involved a truck with registration number LAGOS APP 397 YA and a Mazda bus marked LAGOS EPE 575 XA.

The PRO said the bus rammed into a low bed truck while making U-turn at the Danliti junction near Mowe axis of the state.

It was gathered that three people were in the truck while the bus was occupied by 18 passengers including a toddler.

The ill-fated vehicles, according to eyewitness account were said to be travelling to Lagos while the driver of the truck was reported to have attempted to make a U-turn at Danliti before the unfortunate happened.

The driver of the bus was said to have rammed into the truck from behind due to reckless driving and loss of control.

Four males and a female died on the spot while 15 passengers including a toddler were injured.

The injured ones were taken to a private hospital in Sagamu for treatment while the remains of the victims were moved to the morgue of the Olabisi Onabanjo University Teaching Hospital (OOUTH), Sagamu.